Guest post by my friend and fellow explorer, Luc Sala of Amsterdam.

On June 2, 2014, Alexander (Sasha) Shulgin left this world, nearly 89 years old. With him, the era of the great psychedelic revelation and revolution comes to an end. With the likes of Hofmann, McKenna and Leary he was one of the flag bearers of that era, struggling to free psychedelics from the criminal connotation, the projected dangers and the guilt trips of the establishment. I have known these people, they were my friends and mentors and they helped me realize that reality is a very personal interpretation of something much wider and deeper, that truth is only my truth and that tolerance for the truth of others is the highest virtue. A new paradigm of accepting that the psyche is more than the mind and brains is emerging lately, new research in the potential of these substances is happening, a new and more positive appreciation of what these substances can do for us is manifesting. We have to honor people like Sasha who went before us and dared to explore and experiment, at great personal risk both to their body and their status in society, with the powers hidden in the amphetamines, tryptamines and other psychoactive molecules.

Sasha was a true alchemist, and although he would defend his work as rational science and his inspiration as being instrumental in human progress, I believe he was really motivated by the high of exploring new territory, the enchanted realm of beyondedness. The lab behind his house was his playground, the use of his concoctions alone or with friends his excuse for showing love. I know he was aware of other-world relationships of the power of intention and causation much more than would come out in his lectures and books. He wore this mask of being rational, a scientist, not a mystic. But then we discussed the prerogative of the inventor, or discoverer as he would see it, as to set the tone, name and shape a new substance-- the inventor as reality-creator, not a very rational approach. He was a believer, maybe not in God but certainly in love.

What a life, being able to chart new territory, open new vistas and expand the human experience, share this with friends the world over and feel the love. I always felt his presence, his loving energy radiating towards me when driving towards his farmhouse in Lafayette, in the shadow of Monte Diablo. He was in a way a sorcerer, a servant of the devil, for it takes devils to help one see the One, to break the spell of hypnotic reality formation and enter the inner worlds. Psychedelic experiences and especially the ones that help us see inside our selves and help us in letting go of masks and ego are seldom easy -- we must face the traumas and defenses and the devil inside us. Sasha would joke about this, his humor was his way to deal with the gravity, the consequences of his work, his responsibility for releasing powers into the world with more potential impact than weapons of war. His defense against the mountain behind his house was building his own mountain of wine bottles in his garden and maybe his love for music. (Sasha played the violin and was often invited to help provide the sound track for the annual gathering of bigshots at Bohemian Grove.)

His achievements in chemistry are well known, he is called the grandfather of psychedelics and MDMA,  his (and Anne’s) books are classics, but his legacy goes well beyond the ‘dirty pictures’ of chemical formulas. He was a focal point in the movement, always willing to speak and travel, to share his insights in his own personal way of juggling words, concepts and wisdom.

I have met him many times, in various parts of the world, but the Easter parties at his home were where one could meet the inner circle of the psychedelic illuminati, where psychedelic history was alive, where his central role in that community was evident and natural -- he was the arch-bishop rather than the grandfather of psychedelics. He was an outspoken critic of including psychedelics in the war against drugs, which really was and is the war against liberty and freedom.

With Sasha’s death I feel lost. I am a mere foot soldier in the battle for freedom, for the liberty to 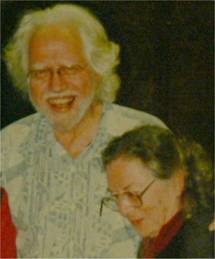 think for myself, to learn about myself and to escape the deterministic profiling of DNA, cyberspace superpowers and materialistic society. Where to look now for guidance, for support, for the role-models I need, for the overview and mature authority people like Shulgin provided? I will miss him, and wish for strength and courage for Anne and the worldwide circle of family, tribe and friends who will have to do without Sasha.