Dr. Jabir's KUBLA KHAN: a modern version of Samuel Coleridge's celebrated Pleasure Dome poem conceived during an opium vision--Coleridge's setting it down in writing cut off abruptly by a visit from some anonymous "person from Porlock". Could Jabir in his dervish trance have recaptured in this short video a few of Coleridge's lost stanzas?

Today's the 3rd birthday of this Quantum Tantra blog. This year I added "tags"--a kind of crude table of contents--for more convenient exploration of older posts. 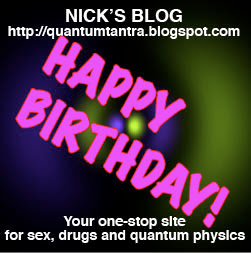 Hippies in the Sunday Times

Here's the book's webpage with pictures and reviews.


The buzz for David's book began in the blogs--in my own blog, in Peter Woit's and Chad Orzel's. (Everyone is eagerly awaiting an endorsement from Lubos Motl, controversial physics blogoczar and kingmaker to the lucrative Czech science book market).


That initial buzz around David's book has now expanded to a ROAR with a review by George Johnson in this Sunday's New York Times. A book review in the Sunday Times is the literary equivalent of a private interview with the Pope.


George Johnson lives in Santa Fe, New Mexico and is the prize-winning author of The Ten Most Beautiful Experiments, an acclaimed biography of Nobel physicist Murray Gell-Mann as well as many other well-crafted pieces of science writing.

George Johnson concluded his mostly sympathetic review of Kaiser's book with the judgment that much of the work of "the hippies who saved physics" was mere "physics porn"--"titillating but with no follow through".

How could Johnson have known in his witty putdown that one of the goals of my own quantum tantra research is to discover a more intimate way of connecting with nature than merely reading the results of classical instruments?

In writing his review, George Johnson knew nothing of Lifting the Veil of a New Sensual Science, of Tantric Jihad, of Future Science, No More Safe Science, of Physicist, Heal Thyself or of Opening Night.

Will future generations recognize science journalist George Johnson not only for his substantial body of science writing but also as an unconscious herald of the freshest and most unlikely revolution in modern physics?

When the Impossible Happens

How would history have changed had Sigmund Freud's favorite drug been LSD instead of cocaine?

Using lysergic acid instead of analysis to access the unconscious mind, Freud's career might have resembled Stan Grof's as recounted in When the Impossible Happens. Freud might have escaped his dreary office in Vienna, lived 14 years at Esalen Institute, taken peyote with Indians in Kansas, MDA in Palenque and ketamine in Machu Picchu, guided hundreds of patients thru the tangled jungles of their own personalities using LSD sessions, Holotropic breath work and other radical mind-opening techniques. Like Freud, Grof brings a sophisticated European mind set to bear to evaluate a lifetime of extraordinary experiences. Unlike Tim Leary and Terence McKenna, who were of Irish blood, Stanislav Grof was born in Czechoslovakia and possesses a "Slavic soul" which binds him solidly to the soil even as his yearnings for the infinite bring him face to face with experiences that would shake the sanity of many less solidly grounded men.

I'm sure that if Stan were to encounter Satan (which he does in one of the episodes in this book) he would do so calmly, all senses alert, pushing his fear into the background while striving rationally to assess the true dimensions of the experience. Stan is a compassionate scientist and brave explorer of the heights and depths of human consciousness. Of all of his many books, When the Impossible Happens is the most biographical and offers personal stories of the most astonishing high points of his long career as an passionate courtier of non-ordinary realities.

His book consists of more than 60 short episodes, from Stan Grof's first LSD experience as a fledgling doctor in Prague, to his years with his wife Christina as scholar-in-residence at Esalen, to psychic adventures in Iceland, Brazil, Mexico and Australia. This is a book of experiences not theory. And, as the title suggests, many of his experiences would be considered "impossible" according to our present model of the human mind which holds that consciousness is solely the product of some (as yet unknown) process in the brain--a position called "reductive materialism" by its supporters and "promissory materialism" by its critics. Just as the goal of modern physics is to explain not only the ordinary world but every sort of outlandish physical phenomena made accessible by Hubbles, LHCs and even newer probes on the horizon, so any serious psychologist (mind scientist) should welcome this account of dozens of exotic psychological "quarks" and "gluons" observed during a lifetime of exploring the extreme edges of human experience.

Stan is an splendid story teller and one finds oneself experiencing the emotions that he must have felt as the events were actually happening. I was pleased to discover his account of an extraordinary adventure in which I played a small role--Stan's marriage to Joan Halifax which took place in a volcanic caldera in Iceland, in a Viking wedding ritual designed by Icelandic mythologist Einar Pallson and Joseph Campbell, who gave away the bride. My wife Betsy and I brought the traditional child to the wedding--our son, Khola, who had just celebrated his second birthday a day before with the children of the kitchen staff. We wedding guests arranged ourselves in a ring around the edge of the caldera and after the ceremony, Stan and Joan went around the circle to be congratulated. At the moment when Betsy, Khola and I embraced them, the midnight sun which had temporary dipped below the horizon, suddenly rose and flooded the five of us with its brilliant light.

I know Stan slightly but over the years our paths have crossed several times since that first meeting in Iceland. As a fellow Slav and a member of his wedding I feel a personal bond. I admire him as an expecially bold scientist and always feel a bit high when coming into his presence.

Nick's not the only one who admires Stan Grof. In 2007, Vlaclav Havel, the president of Czechoslovakia, presented the VISION 97 award to Stan for his pioneering research into non-ordinary states of consciousness.

When the Impossible Happens is one of the best tour guides I can recommend into the details of some of those non-ordinary states.

Next month Dr. Stanislav Grof will experience his eightieth trip around the Sun.


Happy Birthday, Stan!
Posted by nick herbert at 11:11 AM 0 comments