Advice from the Head Prankster 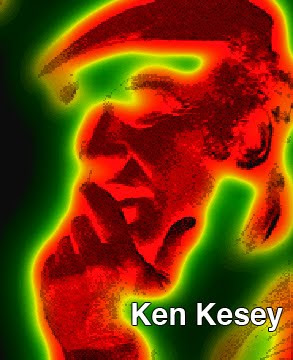 In the middle '60s my social circle happened to intersect that of Ken Kesey, best-selling author, leader of the Merry Pranksters, Commodore of "Furthur", the Psychedelic Bus, and instigator of the infamous "Can You Pass the Acid Test?" experiments in psychedelic sociology. Kesey had been introduced to the effects of LSD by Dr Leo Hollister at the VA Hospital in Palo Alto, getting dosed in the same building where poet Allen Ginsberg and physicist Heinz Pagels were similarly initiated into the psychedelic mysteries. Tom Wolfe has documented some of Kesey's pranks in The Electric Kool-Aid Acid Test, one of the most informative books to come out of that decidedly experiential and anti-literary era. Another little appreciated literary record of those tumultuous times was Gypsy Joker biker William J Craddock's Be Not Content which chronicles Craddock's mind-altered adventures in the precincts of San Jose, Boulder Creek and Big Sur. And who can forget the heart-warming tale of how spooks in the CIA, secretly testing biochemical Weapons of Mental Domination on our own people, inadvertently triggered the massive, colorful and wildly out-of-control Haight-Ashbury Effect?

During the Summer of Love Era, I lived in Los Trancos Woods, a rural outpost of Portola Valley, while Ken Kesey was holding court in nearby La Honda. We first met at a party in Palo Alto hosted by lovely Shirley Burlingame. Gathered in Shirley's living room, under the seductive spell of the usual intoxicants, drawn into a hushed, dark, candle-lit circle with other Seekers of Deep Reality, the Head Prankster Himself gifted me with the best piece of advice I've ever gotten from mortal man or woman.

Ah,but thank the goddess you didn't follow that advice (to stop talking, not to listen, which you've always done quite well).

This reminds me of my own father who said, "If you shut up and listen, you just might learn something."

Jim Fadiman added in a email Kennet Roshi's variation on Ken's advice --- Never miss an opportunity to not speak.

ken kesey stole a huge sack of marijuana from me. he was in town on some kind of speaking tour in 1991 or so. i was among those who arranged his visit. and as he tooled away in a limousine, he left with my dope and flipped me off! ken kesey stole my dope! it was a really big sack, a painful loss.

Now Ken is dead
and you're alive.
Ain't karma wonderful?

way to burn my hero worship tho...