The Empire vs Amanita 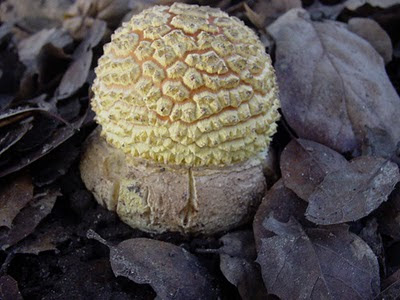 Wandering in the woods near Schwann Lakes in Santa Cruz on the first sunny December day after a week of rain, we discovered with pleasure that the entire forest had mushroomed. And that one of the most prominent upstarts were colonies of the bright red Amanita Muscaria. Amanitas were everywhere! 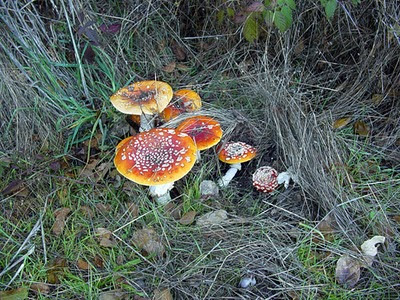 Red Amanitas are a common theme in fairy-tale illustrations where they form the background and sometime homes of supernatural creatures such as elves, fairies, sprites and the occasional hookah-puffing caterpillar. They have been associated with the Santa Claus legend, Viking berzerkers and used for psychedelic trances by Siberian shamans and modern-day mind explorers. Scientific and cultural information concerning this strikingly beautiful fungus may be found on Wikipedia while trust-worthy information about its mind-altering properties may be found at the Erowid site. 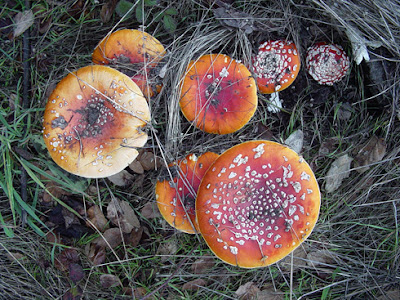 The oldest known religious scriptures, the Hindu Vedas, contain more than 90 hymns of praise honoring a mysterious potion called "soma" which seemed to act as a gateway to profound religious experiences.
Almost a hundred hymns in praise of a mind-altering brew? One can only speculate how different our lives would be if the Judeo-Christian Old Testament had contained half a dozen books commending some holy psychedelic substance as a reliable pathway into Jehovah's presence.

In Soma, Divine Mushroom of Immortality, J. P. Morgan vice-president and amateur ethnomycologist R. Gordon Wasson has argued that the Vedic soma was a brew prepared from the Amanita muscaria mushroom. Paraphrasing the Vedas I offer this little hymn to the power inside these beautiful Amanitas. 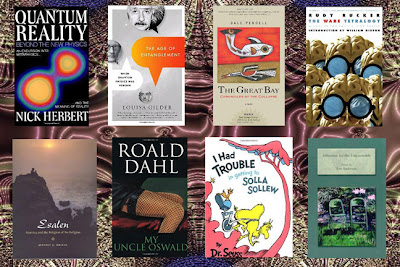 Wondering what to give the book lovers on your holiday list? Why not ignore the blockbuster bestsellers and go for the unique and unusual this year? Here's a selection of some of Nick Herbert's favorite things in print.

1. Quantum Reality: Beyond the New Physics by Nick Herbert. Not only one of the best popular books on quantum physics but also the best book about the quantum reality question--a problem so simple to state (what is a measurement?) but so difficult to solve that it continues to baffle every physicist who has ever encountered it. QR is your royal road to this deep quantum mystery.

2. The Age of Entanglement: When Quantum Mechanics Was Reborn by Louisa Gilder. "Entanglement" is an intimate connection between things only possible in quantum physics. Through lively imagined conversations between physicists, Gilder describes the birth and development of this new quantum intimacy and its present exploitation in the growing fields of quantum computing and quantum cryptography.

3. The Great Bay: Chronicles of the Collapse by Dale Pendell. A kind of Decline and Fall of the Roman Empire for the entire human species. Pendell is best known for his three-volume history of mind-altering drugs from coffee beans to ecstasy. Pendell's Great Bay has been aptly described as "wise, cunning, ecological fiction."

4. The Ware Tetralogy by Rudy Rucker (introduction by William Gibson). Rucker's science fiction is truly twisted, bizarre and wildly funny. Although described as a "cyberpunk", Rudy disdains the cyberpunk label in favor of his own one-man genre of "beatnik science fiction". Here in one volume are four of Rucker's most imaginative (and my favorite) novels: Software, Wetware, Freeware and Realware.

5. Esalen: America and the Religion of No Religion by Jeffrey Kripal. The official history of the flagship growth center in Big Sur that continues to foster innovative movements in psychology, bodywork, international relations and other facets of "the human potential". Full of stories of people and ideas. Kripal covers in full Esalen's almost-50-year-old history. Another good book about Esalen's early years is Walter Truett Anderson's Upstart Spring.

7. Everybody loves Dr Suess books but "That famous Cat in the Hat? Nick does not like that Cat!" Nick's favorite Suess book is I Had Trouble in Getting to Solla Sollew. My son Khola liked it too, but his all-time favorite children's book was Kick, Pass and Run--a book about animals learning to play football. Betsy and I must have read him KPR a thousand times.

8. Santa Cruz, CA boasts a vibrant poetry scene, partly due to the efforts of Len Anderson and Dennis Morton who host the Poetry Santa Cruz website and associated readings. Len Anderson, a Berkeley physics PhD, recently published Affection for the Unknowable, a collection of his poems. Other fine Santa Cruz poetry collections include Robert Sward's 4 Incarnations, Patti Sirens' Antarctica and a recent anthology Harvest from the Emerald Orchard featuring 18 Santa Cruz poets. Behave like a Medici. Become a patron of the arts. Purchase a few books of poetry.
Posted by nick herbert at 8:08 PM 0 comments