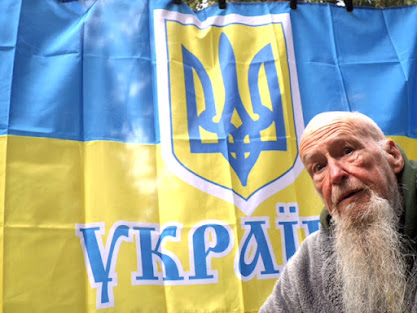 Friends of the (human) family—
﻿
﻿When August and I first got together she encouraged me to examine and appreciate my ethnic roots which are Slovak on my mother’s side and Ukrainian on my dad's side. For both of my parents English was their second language and among themselves they spoke some sort of Slavic tongue none of us five kids could understand. I grew up with Slovak conversation as a kind of soothing background music.

Both sets of grandparents came to America around 1900 and both worked in (separate) coal mines in Ohio and Pennsylvania. My parents met not in some mining town but in the steel-making city of Lorain, OH where a lot of Slovaks migrated after the mines.

There was a shop in Capitola where August lived that sold all sorts of curious objects among which were the flags of various nations and to humor Nick August bought me a Ukrainian flag which I hung outside on my deck next to my bath pavilion. Years of Boulder Creek rain, wind and summer sun gradually deteriorated that flag until it turned into tatters and I threw it away. But about a year or so ago I ordered a fancier version from Amazon which I hung out on nice days and kept inside when it rained.

This flag was more than just the simple blue and gold but also featured the Ukrainian trident and the words Ukraina in Cyrillic characters.

The fate of Ukraine in modern times has been to be sandwiched between two greater powers. Russia on one side and Lithuanians, or Poles, or Germans on the other. Lately the United States has taken an interest in this resource-rich land and managed to violently overthrow its democratically-elected president in 2014, replacing him with a vassal more compliant to the entities who run America. Not entirely innocent, these Ukes, as they call themselves, they treat their Russian-speaking minority somewhat the way Israelis treat Palestinians, as an unfavored underclass, using heavy artillery in this case to murder thousands of Russian-speaking civilians in the Donetsk and Luhansk Oblasts with the tacit approval of our hypocritical American government.

Today I unfurled my ethnic flag and mourned the sad entangled fates of Ukraine and Russia. But more mourned the sad descent of the country of my birth into a terrible New Dark Age.

Good luck to us all.
Nick