In the summer of 1960, I was living in a loft in Berkeley near Rose and Shattuck and working as a lab tech at the Berkeley Radiation Lab, minding the liquid hydrogen refrigerator for the 72-inch bubble chamber which tracked nuclear events spawned by protons from the Berkeley Bevatron--the highest-energy particle accelerator of its day, comparable to today's LHC. A few years earlier physicists at the Bevatron had discovered the antiproton  and were exploring other new high-energy hadron reactions.

I had just completed my first year of course work at Stanford, was teaching a graduate physics lab and preparing for the qualifying exams for the PhD. I was a practicing Catholic then and was reading Dante's Inferno, the Book of Job, Chesterton's Orthodoxy and planning to find a spiritual advisor at Berkeley's Newman Club. I was working swing shift at the Rad Lab which seriously disrupted my sleep schedule. I had fallen in  love with a woman named Audrey in San Francisco and was enjoying exploring the City's bounties with her and her two roommates. At that time (Summer 1960) the only mind-altering drugs I had ever experienced were legal and ethanol-based.

The bedroom in my loft had a small window with a view of San Francisco Bay. I was sitting on my bed in T-shirt and sweat pants with my back to the window getting ready for sleep one night when I suddenly heard a voice in the empty room. "Hello, Nick." I turned to the window but no one could have climbed up the sheer wall and spoken thru the panes. The voice was inside my head.

"Hello, Nick." The voice was male, a middle-aged man, spoken in a matter-of-fact way. The man, who I will call "Tony", did not identify himself and got straight to the point.

"You are reaching a crucial stage in your life, Nick, and must make a choice between two careers. Two kinds of life await you and I am asking you now to choose between them. One life will be regular, understandable and conventional; the other will be unusual, unpredictable and unconventional. Both of these lives are good lives. Now choose between them."

"How can I choose?" I told the voice in my head. "Tell me more about these lives."

"You know all you need to know," the voice replied. "Now choose."

"Tell me more, " I pleaded. "Make your choice," said the voice in my head.

And so it went for five or ten frustrating minutes. I wanted more info. He wanted me to choose.

"Alright," the voice said and vanished. I got the sense that "Tony" had other obligations that night and didn't have the time to waste with me. I was shaking all over during this encounter and my clothes were soaked with sweat. "What the hell was that?" I thought.

I did what any scientist would do. I went to the library.

I found that people hearing voices was not uncommon. More than 10% of folks have heard voices and now I was one of them. This experience gave me a sympathetic ear for people whom I met later in life who reported hearing voices too.

Being a sophisticated scientist, my first assumption was that "Tony" was a part of my subconscious and that I was simply "speaking to myself". However, the experience didn't feel that way. Tony felt like a real person, different from me, with a distinct personality. From his tone of voice and manner of speaking, "Tony" came across as a regular guy, a butcher or a bus driver, who was now working as some sort of discarnate bureaucrat. I call him an "angel" because he was a discarnate entity, but far below the level of God and the saints. If I was making "Tony" up, I was doing a great acting job. It really worked. The guy felt real.

A second argument against my making this up was the utter ordinariness of the transaction. If I possessed an unconscious need to star in some fabulous drama, why not invent some Egyptian king, wizard or holy man to talk to?  Why did I make up ordinary Tony and not Hermes Trimegistus?

I marked this experience as "unsolved" and went on with my life. But three years later I met "Tony" again.

In three years a lot had happened. I had been accepted for the PhD program, I had (uneventfully) ceased being a Catholic, I had come within inches of losing my life in a climbing accident on Mt Shasta and, thanks to some dear friends in the Stanford psychology department, I had experienced LSD--a big dose.

I was then living in Los Trancos Woods, a semi-rural area in the hills behind Stanford, and had just dropped acid for the third time. I was awaiting my sitter (in those days we always had sitters to provide "ground control") but my friend was delayed waiting for a pie to bake. So for the first part of the trip I was on my own and exploring the sensual distortions, the merging with the walls and scenery and the philosophical paradoxes that a few mikes of this mind medicine can be counted on to produce.

What I didn't count on was that in the middle of my trip, Tony showed up. "Hi, Nick, " he said. "Same choice. No new information." "OK," I said. "I'll take that strange life." (Given the context, it was obvious what path I had already chosen.) "Thanks," said Tony, noting my decision on some invisible clipboard (Sometime later religion scholar Jeffrey Kripal dubbed this experience the "clipboard angel".)  My angel vanished and though I have since had a few more episodes of voices in my head, none of them ever behaved like Tony.
Posted by nick herbert at 5:55 PM 9 comments

1. Matter Fundamentalism:
Matter is all there is.
Behind phenomena
there is no Other
with Whom to connect.

2.  Classical Mysticism:
Every instant of our life
is an exercise in merging
with an ever-present Mystery
that today's scientists
are impotent to discern.

3. Classical Tantra:
Every glance is Her Glance
Every touch Her Touch
Every smell is Her sexual attractant
Every meeting a teaching.

4. Quantum Tantra:
For millennia we've played in the shallows
Our sciences mere baby steps
With the advent of quantum reality
Get ready to taste Nature's depths.
Posted by nick herbert at 9:19 PM 4 comments

Having trouble driving at night: headlight glare and 4-6 degree rainbow halos around small light sources; loss of contrast and fuzzy vision similar to dirty glasses. Black musical notes look grey. Diagnosed with cataracts in both eyes. Cataract means opacities in the lens which in advanced stages look white like water at the bottom of a waterfall. Hence the name. Modern cure for this eye disease is surgical removal of lens under local anesthetic and replacement with optically corrected clear polymer lens.

I made appointment with surgeon Harvey Fishman and after exchanging the secret Stanford handshake he told me more than I needed to know about the structure of my eye and details of the surgery. Using space-age diagnostic instruments, his staff measured lots of parameters of my eyes including corneal topography so that the replacement lens would give me perfect vision. Harvey is also the inventor of an iPhone app called EyeSnapi for taking pictures of the eye to email to your doctor.

I was very anxious about this operation because it involves being conscious while someone cuts opens your eye. Yet many people that I spoke to assured me that the operation was not unpleasant. During the operation I was conscious of a bright field of light containing three fuzzy rectangular objects and could hear and respond to voices but the operation was generally comfortable and not traumatic. In addition to the local anesthetic, nurses administer a sedative related to Valium thru an IV. The operation lasted about half an hour after which my friends Alan and Sun drove me home.

Recovery consists of administering lots of expensive eye drops four times a day and wearing a protective eye patch at night.. After a few days I have pretty good vision in both eyes but the size of the image in the operated eye is about 20% larger than the natural eye which still requires a corrective lens. My neural programming is rapidly adapting to the new eye and for most activities I can function just fine. Going down stairways is difficult--I sometimes perceive twice as many steps as normal beings. An informative account of recovery from this surgery by Charles ("Doctors make awful patients") Slonim, a cataract surgeon who experienced the operation himself, is here. 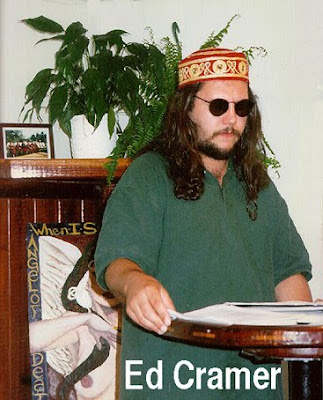 Ed Cramer MCs at the BC Bistro
ODE TO ED
An artist, a dreamer, a roustabout clown
a friend, a sativer, a man-about-town
a poet, a lover, a sly mischief-maker
a scholar, a shaman, a fine master baker
a lover of life and of yeast and of dough
and of things that go "squish" in the night.

You've seen the movie "Oklahoma"
It celebrates historic pride
where farmers, ranchers made there home--ah!
Well, Ed's folks were on the other side
and (if they could speak)
they'd sure want us to understand
we're squatting here tonight on Indian land.

What scent is that thru yonder window breaks?
Methinks it smells of something good that bakes
Mayhaps some freaky pizza, magic muffins,
grainful bread
We see, smell, touch and taste the genius of Ed
True Nature's* hearty oven-tending fiend
he daily masterbakes behind the scenes.

In our Moorish Church, his holy name
is Grand Imam Omar abu Khan
Fakir of the Mountain's Teat
a friend to woman--and to "mon".
As part of his august profession
Omar's empowered to hear confession
Your guilt, your shame, your most obscene...
bring to Omar: he'll wipe you clean
With Omar, you never have to take a chance:
your sins are always pardoned in advance.

And Ed invented Captain Bathrobe
a champion in the war on drugs
who knows that downing tabs or mugs
of mind-perturbing chemistry
is part of ancient human history:
for where would we ignorant monkeys be
if you chopped off our curiosity?

To JJ's mountain lair** he oft repaired
with Craig# and Ashley##,
our late lamented Buddhist bard
seduced by that hot flirtatious muse
of poetry to launch enormous argosies
of verse on love and death and life
and catch the scent of poet's paradise.

An artist, a dreamer, a roustabout clown
a friend, a sativer, a man-about-town
a poet, a lover, a sly mischief-maker
a scholar, a shaman, a fine master baker
a lover of life and of yeast and of dough
and of things that go "squish" in the night.