Happiness in the Mouth 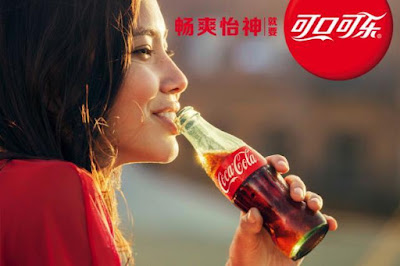 HAPPINESS IN THE MOUTH

The Chinese characters for "Coca Cola"
spell "happiness in the mouth"
which we Americans find quaint
and a bit risque'.

We say: all day my legs, my back,
my shoulders hurt
We never say: all night my knees, my neck,
my wrists were blissful.

We suffer head aches, ear aches and belly aches.
And how many heartaches have we felt? A lot.

But seldom are we gladdened by head joy,
by ear joy or belly joy.
And how often do we feel heart joy?
Not often enough.

We are a nation of whiners!
Our language gives us away:

I say: get off my aching back!
Your constant bitching makes me sick!

You make me wonderfully well
You gladden my feelings
You are a happiness in my throat,
a merriment in my bones
You are a delight in my pancreas
You are my blissful urethra
You are a royal joy in the ass

You are my body's felicity
You are my heart's delight
You are the bliss in my juices
You are a pleasure in every vertebrae
You are a happiness in the mouth.
Posted by nick herbert at 7:53 AM 5 comments 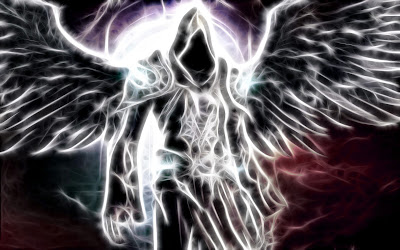 When I meet the angel of death
Will She be lovely and voluptuous?
When She catch my wary eye
Will I see reflected in Her face
Everything I've ever loved?

When I meet the angel of death
Will She be lovely and voluptuous?
When She take my hand in Hers
Will it feel like stumbling back
into a piece of music?
Will death be like falling
into dreamless sleep?
Will death be like dissolving into the elements?
back into Carbon, Nitrogen and Phosphorus?

When I meet the angel of death
Will She be lovely and voluptuous?
When She kiss me with Her promiscuous mouth
Will Her kisses drive me out of this world?
out of this body?
out of this mind?

When I meet the angel of death
Will She be lovely and voluptuous?
When She take me in Her ancient arms
Will Her beauty take my breath away?
Will Her beauty blind me, dazzling my senses?

When I meet the angel of death
Will She be lovely and voluptuous?
When She strip the clothes from my body
Will Her eagerness make me out of breath
out of sight?
out of hearing?
out of here?

When I meet the angel of death
Will She be lovely and voluptuous?
When She press Her irresistable body to mine
How will Her angelic skin feel to my touch?
What will death smell like?
How will She taste?

When I meet the angel of death
Will She be lovely and voluptuous?
Will She be That One Woman
I have been seeking my whole life
In the arms of others?

When I meet the angel of death
Will She be lovely and voluptuous?
Will She be That One Woman
I have been dying to meet?

Personal experience, scientific research and the occasional spectacular phenomenon (a flying monk from Cupertino, for instance) seem to demonstrate the real existence of psychic powers, but our theoretical understanding and extension of such powers seems not to have advanced at all. Most limiting is the fact that we possess no confident scientific understanding of ordinary consciousness let alone its paranormal extensions. Much to be desired would be the application of the methods of our dazzlingly successful physical sciences to some of the problems of mind. That is what I have done, in a small way, in an article soon to appear in the journal Activitas Nervosa Superior (online version here) as part of a Festschrift in honor of Berkeley physicist Henry Pierce Stapp.

On the other hand, the moderators of the Cornell University Physics arXiv, which I scan daily, looking for innovations in quantum physics, have declined to list this article on the grounds that "your submission is not of plausible interest for arXiv." My guess is that the mere mention of "psychic powers" in a physics paper caused some old fuddy duddy at arXiv to lose his lunch.

From the great variety of possible psychic powers I chose extrasensory perception, the alleged ability of a psychically gifted human being to correctly guess, with odds better than chance, the outcome of a sequence of symbols generated by a random process. To simplify the discussion, I limit the choice of target symbols to two, which could be zero/one, black/red, heads/tails or even/odd. And the random process is designed to make each of these two symbols appear with 50/50 probability. The "power" of a psychic faced with such a task is defined by the percentage of correct guesses that consistently exceed 50%. On this scale a perfect score would be "50".

Once we find a high-scoring psychic let's now confront him or her with two different kinds of tasks which I will describe as classical ignorance and quantum ignorance.

In the case of classical ignorance, the target symbol exists before the psychic makes his guess. As in the turning over of a top card -- the card was definitely"black" or "red" but its value was hidden from ordinary perception.

In the case of quantum ignorance, the target symbol is produced only after the guess and is governed by quantum randomness -- the basic uncertainty that governs every quantum transition in the Universe. In the example above, the blue cylinder shoots a single photon at a half-silvered mirror. Whether the mirror deflects the photon forward into red photon detector #1 or sideways into red photon detector #2 is determined by an uncertainty so fundamental that some physicists have joked that not even God can say which path that single photon will take.

Now the question I ask about psychic powers is this: Which kind of ignorance does the psychic find easier for his extrasensory powers to overcome -- classical or quantum uncertainty?

Since we know absolutely nothing about how psychic powers operate, we are free to let our imaginations run wild. Perhaps, for instance, quantum uncertainty is somehow "softer" and more "mindlike" than classical uncertainty so the psychic will score higher on the quantum task. On the other hand, if it is true that not even God can predict the outcome of a quantum-random event, then the psychic must necessarily score higher on the classical task.

Via a digression into the topic of faster-than-light (FTL) signaling schemes, I answer the question of whether a psychic can score better against classical or against quantum ignorance.

For longer than I can remember, I have been curious about superluminal signaling schemes and have invented several devices tagged with unusual acronyms: QUIK, FLASH, ETCALLHOME and many others, and I was much involved in the refutation of Demetrios Kalamidas's ingenious KISS scheme. The detailed refutation of each of these proposals led to a slightly deeper understanding of the foundations of quantum theory. And in the case of the refutation of FLASH, resulted in the discovery of the quantum no-cloning rule.

Each of these proposed FTL signaling devices invokes the strange situation of quantum entanglement in which two photons A and B, separated by a great distance, nonetheless appear to act as though they were a single entity. In the usual setup, photon A is sent to Alice and photon B is sent to Bob. In the math it looks as though what Alice chooses to measure on her photon A seems to instantly affect what Bob will measure on his photon B. Irish physicist John Bell proved in 1964 that any model of reality that correctly describes quantum entanglement must necessarily be non-local, that is, something must be going on that is faster than light. Bell's theorem proves that deep reality must be faster than light. But we humans cannot observe deep reality, only its surface consequences; and these surface consequences always appear to obey the Einstein speed limit.

Indeed, a result proved by Philippe Eberhard, a colleague of Henry Stapp's at Berkeley, shows that any ordinary measurements performed by Alice will have no measurable effect at Bob's receiving site. Eberhard's Proof demonstrates that superluminal signaling using Alice/Bob quantum entanglement is impossible.

To get around the roadblock of Eberhard's Proof, one might consider using a clever and subtle measurement process that evades the proof's assumptions. The hope of devising some unconventional measurement scheme lies behind the KISS, FLASH, QUIK, etc. schemes mentioned above. None of these measurement schemes, however, is bizarre enough to evade Eberhard's sturdy proof of the impossibility of using quantum entanglement for superluminal signaling.

But what about going beyond physics into the realm of psychic powers?

That's what I have done in my recent paper. In my setup, Alice sends Bob a Morse Code signal which he receives as two kinds of ignorance. a dot is encoded as a situation of classical ignorance. And a dash is encoded as a situation of quantum ignorance. Alice sends each symbol as a bunch of N photons that appear at Bob's site to possess the same kind of ignorance, that is, all N photons in a bunch are either all classically or all quantum uncertain.

Upon receiving Alice's message, Bob applies his psychic powers to try to guess the outcome of his measuring a particular bunch of N photons. If Bob's psychic power works better for one kind of ignorance rather than another, then Bob can successfully decode Alice's message as a series of dots and dashes.

This method of signaling faster than light evades Eberhard's Proof because it does not use conventional physical measurements, but measurements of an entirely non-physical kind.

The acronym for my scheme, by the way, is GUESS = Going Unphysical Enables Superluminal Signaling.

This result I call "Nick's restriction". The journal referees made me call it something else but in my blog I can call it anything I want. And so can you.

One beauty of Nick's restriction is that it can be experimentally tested. All one needs to do is find a reliable psychic and to devise a robust on-demand source of quantum randomness.

A further beauty of Nick's restriction is that it cannot fail. If measurement does show the expected result: that a psychic possesses identical powers of guessing quantum or classical random sequences, then Nick's restriction will take its rightful place as one of the solid cornerstone truths of a modern psychic science.

But what if Nick's restriction is false? What if psychic researchers measure a consistent difference between a psychic's ability to fathom one kind of ignorance rather than another?

Why that's even better. For then we will be able to use quantum entanglement to send signals faster than light.

A basic new law of psychic phenomena? Or an easy FTL communication scheme?

On the question of the practical usefulness of Nick's restriction, we simply can't lose.

Posted by nick herbert at 9:52 AM 3 comments