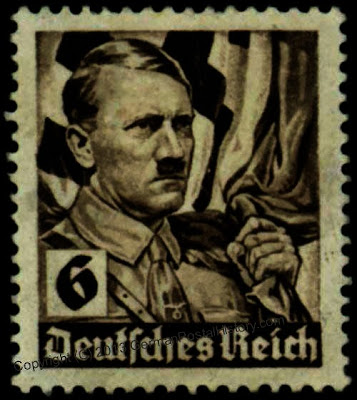 HE DID NOT DIE

(For Jack--If you love Hitler
so much, Nick,
then why don't you write a poem
about him?--Sarfatti.)

"Who is closer to you, Sir"
a monk asked Buddha,
"He who loves you, or he who hates you?"
"He who hates me," replied the Buddha.
"Because he thinks of me more often."

By the power of hate
Is Our Satan kept alive
His deeds in state museums immortalized.
In our hearts we hold Him closer
Than any Christian holds his Lord.

By the power of our hatred
We made places on Earth
Where Satan's so sacred
No man dares display His Mark
Except in secret.

So long as there remains
Just one of us who hates him
He will live on.
His soul is immortal.
Der Führer did not die.

Shortly after the California Gold Rush, Boulder Creek was born as home for gangs of lumberjacks cutting and milling redwood trees to build houses in boom-town San Francisco. Now the loggers are mostly gone, having been displaced by wine-makers, commuters to Silicon Valley and mad geniuses in the hills, but the redwoods still remain, and chain saws are still as common in Boulder Creek as computers. Some of the early settlers were Italian: people with names like Locatelli, Robustelli and Scopazzi. And Italians love to eat.

Boulder Creek's finest restaurant is Scopazzi's, located a few blocks west of Johnnie's Market. And Scopazzi's has recently been hosting a remarkable music group called Joy of Jazz -- named after its leader and singer, the amazing Joy Rush.

Joy Rush (yes, that's her real name) not only sings, but had previously established a reputation in town as a dancer,  teaching her own brand of low-impact dance exercise called Joyrush Fitness Systems. Joy's dance training really shows: when Joy sings, every part of her body moves, not just her lips. Before putting together Joy of Jazz, Joy sang with various other local groups, as in this TV clip of Joy singing and swaying with the Jazzamanders. As its name suggests, Joy's group performs jazz standards and she is sometimes joined on stage by local singers Bonnie Bell and Vicki Coffis.

In addition to their swaying songstress, Joy of Jazz consists of Jack Bowers on piano, George Galt on harmonica, David Nordgren on upright bass, with regular guest appearances by Paul Einzinger on saxophone. Here's a video clip of Joy's back-up crew.

In the early '70s, Jack Bowers made his fame in the San Lorenzo Valley as pianist and song writer for the Valley's notorious hippy band Oganookie, which regularly played at the Town & Country in Ben Lomond-- now a big rambling antique shop but "in the day" the T&C was our local version of San Francisco's Fillmore dance hall, complete with light shows, crazy costumes and outrageous behavior. "We performed over a thousand gigs from Petaluma to San Diego," Jack says, "and recorded an album." Jack also played piano with the Golden State Gamblers and with Jill Croston, a local girl who made good in Nashville as Lacey J Dalton. Jack's longest lasting gig was at Soledad Prison where he managed the Arts in Corrections program for more than 25 years. When First Unto This Country is a good example of Jack's work as performer and arranger.
George Galt is one of Boulder Creek's behind-the-scenes community leaders. As an elected member of the Parks and Recs Department, he plans the details of our annual Fourth of July Parades -- one of the 2 1/2 holidays we celebrate in Boulder Creek, the others being Hallowe'en and -- sometimes -- April Fools Day. George handles the musical aspects of these events and is currently at the center of a project to establish a radio station in BC. George is also on the board of Vajrapani, our local Buddhist center, and has even recorded a few original Buddhist songs including the show-stopping Don't Know Much About Emptiness. George has played and sung with many music groups including running harmonica riffs for Jazzamanders, Fairport Convention and the psychedelic band Ant Trip Ceremony. George repairs cars in his (fixed and mobile) garage in Boulder Creek where he recently replaced the back brakes on my Subaru -- affording a rare opportunity for a tantric quantum mechanic to share vibes with a Buddhist auto mechanic.

David Nordgren has been playing stand-up bass for numerous jazz groups and theater performances in the Santa Cruz area for more than a decade. He's a regular participant in the weekly jazz jams at Santa Cruz's Bocci's Cellar. David both bows and strums his instrument according to the mood of the song and in this short clip (with Bowers and Enzinger) shows off a style both solid and witty.
Paul Einzinger is a saxophone player now living in Felton who, like Dave Nordgren, also jams at Bocci's Cellar. To me Paul's performances seem so smooth and effortless that I was not surprised to hear from him that he had gained a lot of experience by playing in big bands. "Where did you play?" I asked, guessing maybe San Francisco, Chicago or New York. "Oh, in Idaho." Paul replied.

Here's a video clip of Joy of Jazz performing "Young at Heart" on Scopazzi's outside deck.

Nick Herbert is one of this band's biggest fans: I love Joy of Jazz. This group is so...so...QUANTUM! Whether at Scopazzi's or at one of their other musical venues, don't pass up the chance to experience Joy of Jazz. As Joy Rush likes to proclaim: "It's more fun if YOU are there."
Posted by nick herbert at 4:44 PM 2 comments