A Nobel Prize for Nick 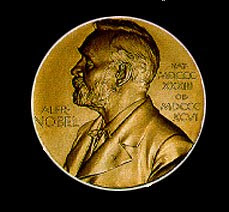 For years I've been experimenting with new ways to formulate and publicize the goals of Quantum Tantra, the as-yet-unrealized, explosively brand-new science of the future. Recently I ran across an early attempt to popularize Quantum Tantra in the form of a Nobel Prize acceptance speech. Here is that world-shattering speech in its entirety.
Posted by nick herbert at 1:11 AM 1 comments 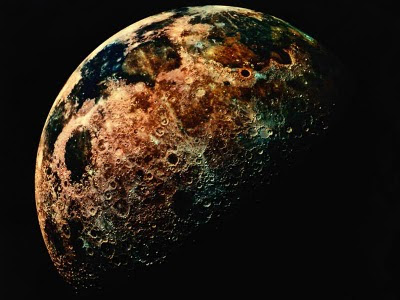 This day marks the second anniversary of Quantum Tantra blog. It's been a busy year which saw the publication of a baker's dozen of Nick's love poems to Mother Nature, as well as the publication of more hot poetry from muse-inspired friends in my own community and the wider world including bard-master supreme D. H. Lawrence.

This year also witnessed the production of a handful of short videos including a two-minute Wagnerian opera (URGE: a short opera about reality) released on Valentine's Day 2010 plus a cartoon animation (Benjamin Bunny Faces Reality) by the late Randy Hamm about the reality behind quantum mechanics. Also the performance of our Irish session band at Santa Cruz lawyer Patrick Reilly's St Patrick's Day party was captured on video.

I am a compulsive reader and have chosen here among the dozens I have devoured this year a few books that merit special attention including my own Quantum Reality-- to which Amazon reviewers have awarded 4-1/2 stars as the book that explains the world's quantum mysteries more clearly than any other book in the world. For every copy sold, a buck goes to the Quantum Tantra Ashram to keep my pantry stocked with meat, Guinness and cat food.

Speaking of quantum physics, last year I happened upon a new law of nature--the quantum no-wedding theorem. And this year My Sweetheart Muse gave me a great birthday gift, called NICK'S THEOREM, that puts quantitative limits on psychic powers--the first instance, to my knowledge, that physics concepts have been used to constrain the powers of the mind. Also in the physics realm, I describe here Four Preposterous Devices which purport to bridge the elusive border twixt mind and matter using concepts imported from quantum physics.

Sadly, a number of deaths occurred this year. In QT blog, I publicized a few, left others for private mourning. Persons memorialized here include my good friend and explorer Earl Crockett (1938-2010); George Leonard (1923-2010), chief mainstay of Esalen Institute, and my wonderful late wife Betsy Rose Rasumny (1938-2002). The departure from the physical plane of these three individuals has left holes that nobody can ever fill.

On a happier note I was pleased to congratulate friend and colleague, John Clauser, on his being awarded the Wolf Prize for experimental work on quantum entanglement. Recently the New York Times featured gym buddy Bruce Damer in its tech pages for his development of the EvoGrid, a massively parallel computer simulation of artificial life. Also this blog was able to recount two of the exploits of the notorious Ferdinand Feghoot: One. Two.

Also appearing this year is the story of Nick & Betsy's move to Boulder Creek more than two decades ago; Scientific American columnist (1914-2010) Martin Gardner's classic essay "Is Realism a Dirty Word?"; a series of mathematical postage stamps "Ten Equations That Changed the World"; the most recent upgrade of my "Tantric Table of the Elements" and a short photo essay by Reno DeCaro: "Egad! It's an iPad!"

A few of the quantum tantra high points of the past year are cataloged below. If you find this sort of thing entertaining, educational and/or enlightening, I encourage you to browse the site for more posts in the same style.

POETRY OF OTHERS (QUANTUM TANTRA YEAR 2):
The Day the Saucers Came by Neil Gaiman
The Man Who Fell for the Universe by Len Anderson
Eyes by Bonnie Eskie
In These Five Remaining Days by Kathleen Flowers
Boulder Creek BistroScene Era (1992-2007)
Whoreson Crawl by Ladislaw Tzestrczyk (aka John Greeley)
The Joyce of Hemp by Walt Bachrach
Antarctica by Patti Sirens
O Taste and See by Denise Levertov
Moonrise by D. H. Lawrence

What do Men Want? 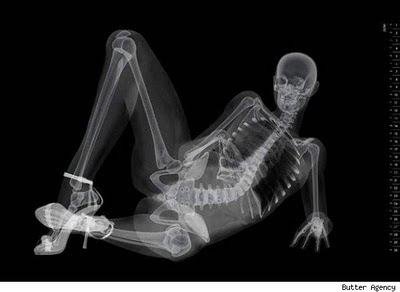 WHAT DO MEN WANT?
DOES SHE DO VULCAN MIND MELD
ON THE FIRST DATE?

I wanna swim in your gene pool, mama;
Snort up your pheromones close range;
Tune into your neurotransmitters;
Introduce you to Doctor Strange.

I wanna surf your quantum potentia;
Mess with your thermostat;
Wanna tour your molecular orbitals;
Wanna feed your Schrödinger cat.

Let's surgically merge our organs:
Our kidneys, our lungs, and our hearts;
Let's read physics journals together
And laugh at the dirty parts.

Let's Bell-connect our bellies
With some quantum-adhesive glue;
Let's do new stuff to each other
That Newton never knew.

Let's dance at warp speed, dearie
Go back before B. C.
We'll dress in period costumes
And make love to our family trees.
Posted by nick herbert at 11:11 AM 3 comments

Bill for a Birth 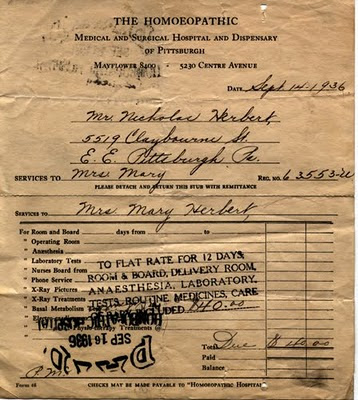 While searching in my archives for photos to illustrate MIT History of Science professor David Kaiser's upcoming book (tentatively entitled How the Hippies Saved Physics) I excavated many Paleolithic layers of personal history including this bill for my birth in a homeopathic hospital in Pittsburgh, PA.

The services for which the hospital billed my parents are itemized thus: "Flat rate for 12 days room and board, delivery room, anesthesia, laboratory tests, routine medicines, care of baby included."

Of course I was born in the middle of America's Great Depression, when forty dollars was a lot of money.
Posted by nick herbert at 4:48 PM 3 comments 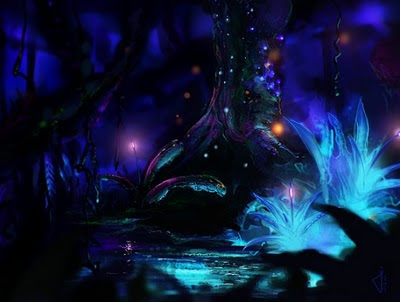 How to Quantum-Entangle Human Beings 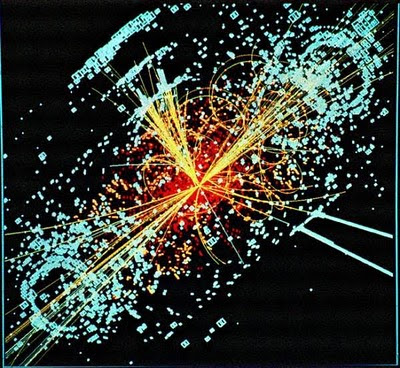 One of the first instruments for directly observing single quantum events was the human eye. A device called the spinthariscope, consisting of a phosphor screen and a lens, allows a human eye to see flashes of light caused by individual charged elementary particles impacting on the phosphor screen. The now-obsolete cathode ray tubes worked by transforming the impact of high-speed electrons into bright flashes of light on a phosphor screen. Many of the early physics experiments on alpha-particle scattering (including Nobel Laureate Ernest Rutherford's experiment that first determined the structure of the atom) were carried out by human eyes working long hours counting light flashes on phosphor screens. These naked-eye detectors have long since been superceded in physics by ingenious electronic means of registering charged particles and photons, down-grading the unsophisticated spinthariscope to the status of a toy.

Recently however, physicist Nicolas Gisin and his colleagues at the University of Geneva have revived interest in the human eye as a detector of light. The modern field of quantum optics has allowed physicists to produce many varieties of "unnatural light", including "squeezed light", "sub- and super-Poissonian light", "Fock state light" as well as "coherent" and "entangled" light. So far all of this "lux contra natura" has only been observed by electronic photon detectors but Gisin et al are now considering for the first time to involve the human eye in these quantum measurements.

Gisin's proposal has inspired wild speculations on the Internet about the possibility of "quantum entangling human beings" by allowing a pair of people to simultaneously observe unnatural forms of light.

Similar speculations concerning the deep entanglement of human beings by exposing their retinas to unusual forms of light were posed earlier in this blog in the context of devices called Stellerator and Lunerator.

Like the motto of Star Trek, the very essence of science is to boldly go where no man has gone before. Most likely deep human entanglement by simple retinal exposure to unnatural forms of illumination will turn out to be a pipedream, but, in science, experiment will always trump speculation.

Gentlemen (and ladies) our scientists have created for your pleasure several astonishingly new forms of light.