And on the third day there was a marriage in Cana of Galilee; and the mother of Jesus was there. And both Jesus (Reb Yeshua) was invited, and his disciples, to the wedding. And the wine having run short, the mother of Jesus said unto him: "Son, they have no wine." Jesus said unto her: "What wouldst thou have me do, woman? Mine hour is not yet come."

His mother said to the servants: "Whatsoever he tells you, do it." And there were set out six waterpots of stone, after the Jewish manner of purification, containing two or three firkins apiece. Jesus said unto them: "Fill the waterpots with water." And they filled them to the brim. Then he said to them: "Draw out now and take to the chief steward of the feast." And they did so. When the chief steward had tasted the water that was made wine, and knew not whence it came (but the servants who drew the water knew) he called the bridegroom and praised him saying: "Every man at the beginning sets forth his good wine and when men have well drunk, then that which is worse, but thou hast kept the good wine until now."

As Jesus was preparing to rejoin his disciples, he saw the steward again conversing anxiously with his mother. As she approached him, he said unto her: "What is it now, woman?" And she whispered unto him so that no other could hear: "Son, they have run out of hashish."

So Jesus again called the servants and caused them to gather dung into baskets from beneath the camels of the guests. He told them to bear these baskets of dung which held 2 or 3 firkins each unto the chief steward of the feast. When he had inhaled just one measure of the hashish which had been dung, the steward exclaimed: "This is truly fine shit, Son of Man, such as the Lebanese merchants keep for themselves, or sell to kings." And Jesus said unto the chief steward: "Friend, when thou gettest high, thou shouldst use none but the finest, for thy mind is a terrible thing to waste."
Posted by nick herbert at 4:56 AM 1 comments

Outside of my best-selling physics book Quantum Reality, my main contribution to the advancement of human knowledge seems to be to invent things that are wrong. But wrong in ways that lead to important new discoveries.

For instance in 1982, I proposed a new laser-based faster-than-light (FTL) signaling scheme which I called FLASH (First Laser-Amplified Superluminal Hookup) whose refutation by Wooters and Zurek, led directly to the discovery of the quantum no-cloning rule which now plays an important role in the brand-new field of quantum computing.

In 2008, I proposed another FTL signaling scheme called ETCALLHOME (Entanglement Telegraphed Communication Avoiding Light-speed Limitations using Hong-Ou-Mandel Effect) which was refuted before it was published by Lev Vaidman at Tel Aviv University and led directly to my discovery of the quantum no-wedding rule which has yet to find a good technological application.

In 2009, I proved "Nick's Theorem" which places quantitative bounds on psychic powers using arguments drawn entirely from physics--the first result of its kind to use purely materialist arguments to set definite limits to immaterial abilities. Judging from my track record, it will only be a matter of time before some enterprising young psychic researcher definitively refutes Nick's Theorem and in the process makes an important new breakthrough into the deep structure of the mental universe.

But of all these "creative failures" none matches in excitement my unsuccessful attempt to refute Bell's Theorem. My first contact with Bell's Theorem (which John Stewart Bell proved in 1964) was in 1970 when my friend Heinz Pagels discovered it in some obscure physics journal and brought a copy to my home in the woods of Boulder Creek. I immediately felt that Bell had to be wrong--what he was proposing was patently absurd. And Nick Herbert would win fame by proving John Bell wrong.

But first I had to simplify his proof so that it was easy to understand--and hence easy to refute. Imagine my surprise when I discovered not a refutation of Bell's Theorem, but the world's simplest proof--only four lines! This short proof now appears in many textbooks; my latest version is published here.

What is Bell's Theorem and why is it so important?

How can puny humans presume to talk sensibly about REALITY ITSELF? On what grounds could we ever hope to even begin such a discussion. Yet John Stewart Bell, a witty Irishman from Belfast, not only presumed to talk about REALITY ITSELF. He did more than talk. This audacious red-bearded Irishman announced in 1964 that he could prove mathematically that REALITY MUST POSSESS CERTAIN PROPERTIES.

What were these properties that Bell claimed that reality must possess?

It has to do with how the physical world is connected together. Is the world "local" or is it "non-local"?

A "local connection" is physics jargon for a distant influence that is mediated at all stages in the transmission. No jumps allowed. A telephone link, for instance, no matter how far the talkers are separated, is an example of a "local" connection. My voice excites the air, which is transformed into electricity in wires in my phone, which goes up to a satellite, down again into wires in your phone, into the air, then into your ear. At each stage of the process, this phone connection is subject to the famous Einstein speed limit: nothing can travel faster than light.

All physics theories and all physics experiments confirm the Einstein limit: no physical object, no wave, no energy, no information has even been observed to travel faster-than-light.

Non-local connections are forbidden by current theories of physics. All physics experiments give strictly local results. Given that the world on the surface seems entirely local one would imagine that to explain this entirely local world, a local reality would suffice.

Contrary to this commonsense expectation, Bell proved that NO LOCAL REALITY CAN EXPLAIN OUR LOCAL WORLD.

Bell proved that reality is non-local. How did he do that? Read my proof.

Bell's audacious proof has been dismissed by some as "mere philosophy" (since reality by its very nature is unobservable) and praised by others as "the most profound discovery in science". But one thing is certain, Bell's theorem has inspired physicists to examine anew the peculiar phenomenon of quantum entanglement and has spawned the development of new quantum technologies such as quantum computing, quantum cryptography and quantum money.

Bell's theorem proves indirectly that reality is non-local. One way to directly show off the world's deep non-locality would be to find a way to use reality to send faster-than-light signals. Quantum teleportation, a recent discovery by six researchers at IBM, comes very close to directly demonstrating instant, unmediated transmission across a large distance.

But what about the Einstein limit? The catch is this. Along with the correct state X, Alice sends three decoy states which Bob cannot distinguish from state X. The correct state is sent when Alice detects a "0" in her counter which happens randomly one time out of four. The only way for Bob to distinguish the correct teleported state from the decoys, is to receive from Alice the information that she got a "0" as a result. But Alice can only send this information via ordinary light-speed-limited channels. Conclusion: quantum information can be teleported faster-than-light. But it needs to be decoded by signals which obey the Einstein speed limit.

John Stewart Bell proved that an invisible instantly connected voodoo reality must underlie our ordinary light-speed mediated world. Quantum teleportation is one practical application of non-local reality. Certainly many more discoveries await us as we explore more deeply the consequences of Bell's astonishing discovery which might be envisioned as the first page of a brand-new chapter in How The Irish Saved Civilization. 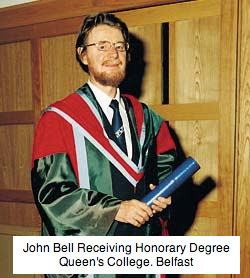 Posted by nick herbert at 9:09 AM 2 comments

Happy New Year 2011! It's traditional on Jan 1 to celebrate in explosive ways, to review the old year and express hopes for the new. My explosive celebrations this year were private and inconclusive so I'll confine myself to quantum tantric reviews and hopes.

Most impressive creation this year was URGE: a short opera about reality--the kind of crazy inspiration that makes you wonder about the nature of the Muse. Is she perverse or what?

Not lacking were a handful of poems from Her Mysterious Grace this year including:


Reports from the quantum frontiers included a new "proof" of the existence of the multiverse by Frank Tipler, the discovery by Adan Cabello of a quantum effect that gets bigger as the size of the system increases, an attempt by Nicolas Gisin to involve human eyes in quantum-entangled systems, a report on a new touch sensor for robots that uses quantum tunneling, and four preposterous devices that prematurely attempted to jump-start the new science of quantum tantra.
For your amusement there's a few short Celtic music performances from a St Paddy's Day party and from the Santa Cruz Scottish Games. Also a report on a trip to the magical city of Amsterdam and a visit to the MBARI open house at Moss Landing. Plus one more Ferdinand Feghoot story.

But wait, wait, there's more! For sheer comic genius nothing could match Les Blatt's historic, hysterical Stanford Physics Department parody of My Fair Lady. Five stars plus the Andromeda galaxy!
The price of getting older is the loss of old friends to Mr Death. This year four good friends took that journey to that country from which none return:
Earl Crockett
George Leonard
James P Hogan
Henry Dakin
On the other hand there were honors for those of us who survived. Brilliant experimental physicist John Clauser was awarded the Wolf Prize for his elucidation of quantum entanglement. Nick made the semi-finals of the 3-Quarks-Daily poetry contest with The New Sex Robot. MIT historian of science David Kaiser completed his book: How the Hippies Saved Physics, and both Michael Murphy, co-founder of Esalen Institute, and my first wife Philippa Meyering celebrated their eightieth birthdays.
My wish for 2011 is for this to be the year that some imaginative physicist working in the area of quantum entanglement (for instance myself, Anton Zeilinger, Nicolas Gisin or Charles Bennett) will discover/invent some clever quantum twist that entangles human consciousness with various other minds in the universe. I wish this year for nothing less than the birth of an entirely new science--a science that totally transforms our vision of ourselves and reality. If the quantum tradition is respected, this new discovery can be expected to be a model of unambiguous mathematical clarity and possessed of a weird and inhuman beauty.
Posted by nick herbert at 6:39 PM 2 comments