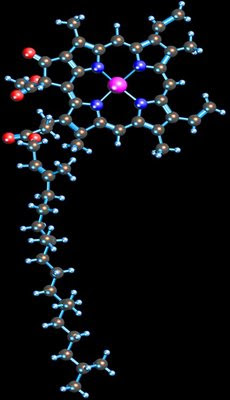 "Arguably the most important molecule of the biosphere, chlorophyll would be the perfect icon for a science-based, earth-centered religion. In the form of a molecular model, its head and tail might easily replace, for example, the Catholic chalice [or, as illustrated here, the Catholic monstrance]. A nature priestess could hold the iconic molecule by its tail and lift its illuminated golden head, truly the bringer of light to life, glittering high in the air before a reverent congregation, That might even lure me back to the church."
Tyler Volk in "Gaia's Body" Copernicus Press (1998) 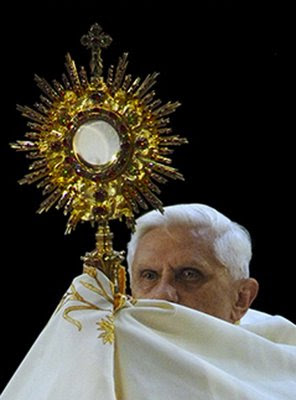 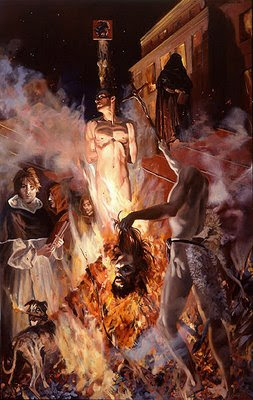 How Could This Work? 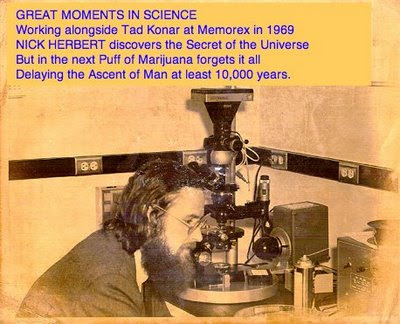 HOW COULD THIS WORK?
Imagine a world
made of intelligent creatures
exceeding six billion and three
each fully convinced
by a kink beyond logic
that this universe centers
on me, me, me.
photo by Tad Konar
analytic chemist, Auschwitz alumnus (1940-45)
Posted by nick herbert at 4:07 PM 2 comments 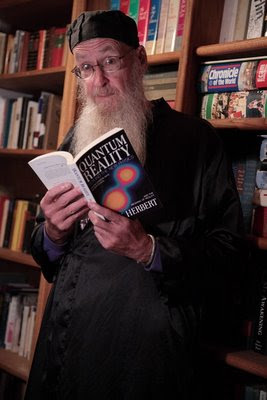 Help Is On the Way 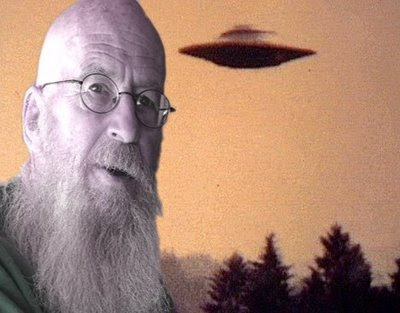 HELP IS ON THE WAY
As your nearest neighbors in the Milky Way
we constantly monitor signals from Earth
on all wavelengths--
including some quantum tantric wavelengths
you've never heard of.
For millions of years
the message from Gaia was the same.
"Leave us alone.
No problem here that we can't solve ourselves."
Recently the Earth signal changed
to one of distress.
And we are hurrying there to help.
As we live some distance away
It will be some time before we reach Earth.
So that you may prepare for our arrival
we are resending your message
(at great expense)
back to you
at faster-than-light speed.
Message from Earth (44*116*775)
"We are helpless to control their numbers.
Please send something
that will eat people."
DOCTOR JABIR
(Channelled from Extraterrestrials.
Or so they represented themselves.)
Posted by nick herbert at 4:34 PM 1 comments 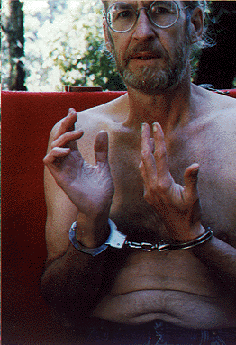 PLEA BARGAIN
OK, I admit I dipped
her pink Vasserette panties
into the juice spilling
from the Cabernet crush.
And, yes, I did afterwards expose
their grape-sticky nylon fabric
to plane-polarized light
from the rising moon.
Yes, and I kissed the seams.
But I didn't know what I was doing.
I didn't know my actions would bring world peace.
I didn't know my actions would open up
these overwhelming influxes
of full-body alien knowledge
now flooding the hearts and minds
of Earth's inhabitants.
I know nobody's getting any work done--
too busy wallowing in 1000 new kinds of sensuality
too busy looking every creature in the eye
too busy touching, smelling, tasting
too busy exploring these new wet sticky doors
opening up everywhere into Nature's deep insides.
I know everybody's blissful now.
I know the New York Times
is calling it
The Goddess's Second Coming.
Sure I'm a responsible scientist
But Our Science was too immature
to anticipate this.
I really didn't know what I was doing.
I plead ignorance.
[Image of Nick taken from JAILBAIT in ZeroCity, Thanks, JJ Webb.]
Posted by nick herbert at 9:01 AM 2 comments 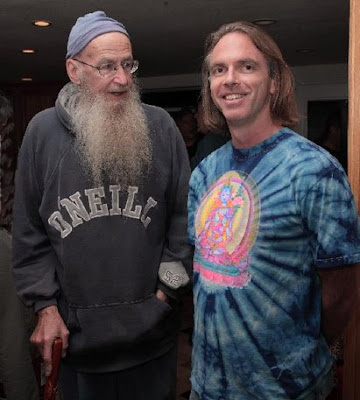 INTERFACE: THE FINAL FRONTIER
Interface, the final frontier
These are the voyages through infinite lifetimes
of the interpenetrating crew
of the Selfship Enterprise X.
Inter pry sex instrumentation
boasts the latest devices for detecting
defining, splicing, separating and redefining
strange new life forms and sensations.
The Selfship is spaceworthy in All
Bard Oceans, dream and material space
with Logosdrive and crew of Integral One
or Polar Two, a Trinity or Prismatic Many.
Passing through the membrane of dream
the crew of selves and genes merges
in an orgy of alchemical plasma
where one is zero without a seam.
The atomic starscape unzips in mind
Elsewhere phenomenal arrays unfold
In one episode the Imagineering Team
must whip out a medium to fuck the wind.
To ride a solar flare like a golddigger
on her sugar daddy. To penetrate another
Universe by fluidizing her thought scape
with the Pneumenoplastic Spoogifier.
To wage war on a demonic black hole
that sucks up all feeling and trickily
makes a feedback quasar of orgiastic
pacifying knowledge in any attacker.
To learn of a world through inhabiting
and living in full every life of every species
that has ever inhabited that world only
as a training exercise in diplomacy.
To go where gnome and dragon and more
where life as light, then algae, flower and fish
where God and Devil as friend and lover
in simulation and blueprint have gone before.
Words by Abu Abulafia.
Picture by Reno DeCaro: Nick and Abu
at Allan Lundell's birthday party 2008.
Posted by nick herbert at 9:21 AM 1 comments 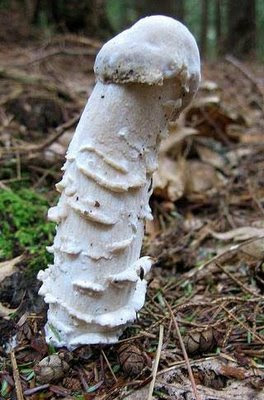 The ancient Greeks saw Nature sexualized
saw goat-foot satyr in the laurel grove
saw naked nereids in the streams
saw playful dryads hiding in the trees.
Here's a phallic woodland treasure
erect and scalloped for her pleasure
And sequoia flaunts her inner core
for humans boldly to explore.
Spinoza thought our greatest pleasure
to be the union of the mind with nature.
Can quantum theory cease to bore us
and give back mankind's enchanted forest? 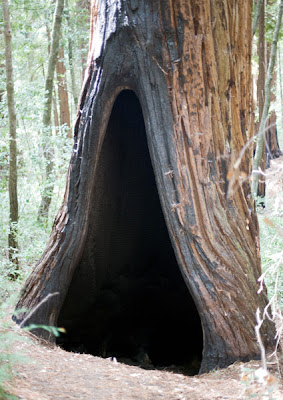