Browsing through the Capitola Library on Christmas Eve, I came across a real gem. It's a big anthology of poetry about science and math called Verse & Universe. The poetry is mainly by non-scientists, taking the material of science as their inspiration. John Updike's justly famous poem about neutrinos is included but none of my own verse -- not even the eminently anthologizable Physics For Beginners. I am enjoying this big book in small bursts as if eating a box of chocolates. Reading this anthology is a good way for a scientist to begin the New Year, to appreciate so many fresh new perspectives on the craft of doing science. So far, having gobbled up only about 40 pages of the 300 plus in the box, my most favorite poem is one by Serbian-American Charles Simic which I reprint here:


MADONNA TOUCHED UP WITH A GOATEE

Most ancient Metaphysics, (poor Metaphysics!)
All decked up in imitation jewelry.
We went for a stroll, arm in arm,
smooching in public
Despite the difference in age.

It's still the 19th century, she whispered.
We were in a knife-fighting neighborhood
Among some rundown relics
of the Industrial Revolution.
Just a little further, she assured me.
In the back of a certain candy store
only she knew about,
The customers were engrossed in
the Phenomenology of the Spirit.

It's long past midnight, my dove, my angel!
We'd better be careful, I thought.
There were young hoods on street corners
With crosses and iron studs
on their leather jackets.
They all looked like they'd read Darwin
and that madman Pavlov,
And were about to ask for a light.
Posted by nick herbert at 9:57 AM 1 comments

Torture Dershowitz, not me
I'll tell you all I know
Of freedom-hating terrorists
And poisoned H2O.

Here's what I'll say if tortured
So you can skip the rack
No shock machines: I'll spill the beans
And never answer back.

I'll finger all conspirators
Turn in my mom and fadda
Don't torture me -- here's what you need:
Al Dershowitz is al Qeadda.

Could lawyer's guise conceal a spy?
Is Al the man behind our troubles?
Is Dershowitz the terrorist
That turned our Towers into rubble?

At first he will deny the charges
But the truth is near at hand
For Harvard profs respond to torture
More smartly than the common man.

He'll confess to kissing Satan
While his testicles are fryin'
Al engineered the Holocaust
And wrote the Protocols of Zion.

Torture Dershowitz, not me
Barbarism's not my diet.
Is Dershowitz so fond of torture?
Then let him be the first to try it.
Posted by nick herbert at 1:56 PM 0 comments

Allan and Sun Lundell (also known as Doctor and Mrs Future) host a radio show every Tuesday in which they interview folks working (and playing) at the edge of science, technology and consciousness. A few days ago they convened a Conclave of Mad/Glad Scientists at a secret beach house location in Rio Del Mar, CA. Most of the scientists invited to the Conclave had appeared on the Dr Future Show and included people demonstrating Russian hand-held electro-vibratory healing devices, brain stimulating machines, light-pattern projectors; people claiming channeled and otherwise inspired visions of the future and reports from Amazon explorers concerning ayahuasca-mediated connections to the Mind of Nature. Musicians, singers (including the remarkable Caroluna) and splendidly-inventive cooks added spice to the Mad/Glad Conclave.

Nick Herbert attended mainly as a spectator, expecting at most to be goaded into battle against some champion of the Catastrophic Anthropogenic Global Warming (CAGW) hypothesis of which he had recently expressed his reasons for skepticism over the airwaves on the Dr Future Show.

But instead, during a break in the stream of speakers, Nick was called to the stage and asked to do whatever he pleased. He obliged by recounting his Abduction by Aliens story which was captured by Dr Future on video and posted on YouTube.


Later, away from the food, the drink and the music, away from the buzzy touch of the Russian healing machine, away from the rushing buzz of the responsive audience and presenters, Nick and Al slipped outside, walked across the sand, took off their shoes and renewed their age-old connection with the sea. 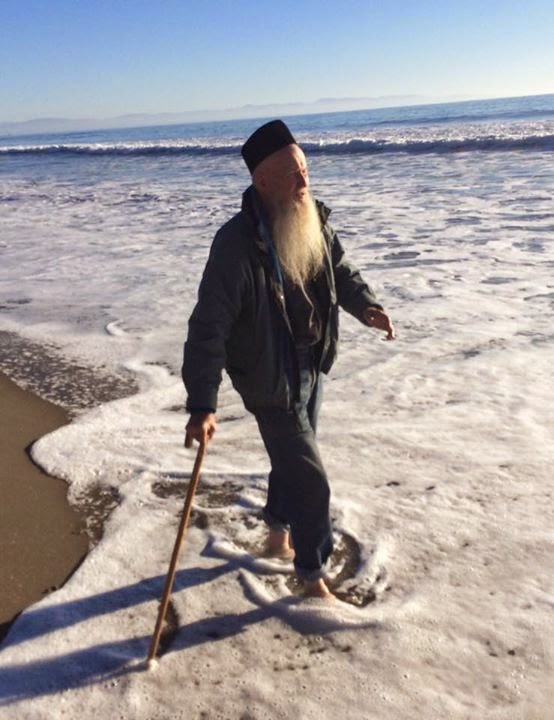