108 CHAKRA ROSARY (VERSION TWO)
Recently Nick developed a system of 108 Chakras (body parts that can be accessed by mind) and a systematic way of exploring these parts in a particular sequence (108 Chakra Rosary). The easiest way to construct such a rosary would be as a loop of 108 beads, as in traditional Buddhist malas. Too many beads I thought. And so I developed a more compact rosary consisting of only 32 beads. But what this small rosary gains in compactness, it loses in the complicated instructions concerning how to fit 108 body parts into 32 beads.
After playing with the original instruction set, I have recently revised the counting of the 108 chakras using 32 beads in this second version which seems to me more natural and easier to remember than the first.

This compact 108 chakra rosary consists of an outer loop of 24 beads, half of them dark and half lite corresponding to my division of chakras into dark and lite, the dark chakras located primarily in the lower parts of the body and the lite chakras situated on top. This outer loop is mostly used to count the 48 Limb Chakras--the 24 Right Limbs circling the loop in CW (Clockwise) direction and the 24  Left Limbs circling in CCW (CounterClockwise) direction. This outer loop is bisected by a string of 8 rainbow beads which are used to count the five 8-chakras sets: Spinal, Hindu, Sensual, Pelvic and Rib-Cage Chakras. The outer loop is also used to count the 18 Cranial Chakras.

Move #0: Starting at the Lite Disk, move onto the LITE link and follow the 6 lite beads to the TOP link. These six beads are merely an excuse to move to the TOP link where the rosary proper begins.  Counting these first beads is the time to formulate why you are focusing your attention on your body's Somatic Stations, whether out of curiosity, exploration, gratitude, meditation or just to practice the moves. These six beads correspond roughly to the Antiphon beads of a Catholic rosary.

The purpose of the chakra rosary is to focus your attention on otherwise neglected body parts. It is not a speed contest, although you may want to pay attention to some parts more than others. "Pay attention" -- an unusual phrase: the monetization of consciousness?

Move #2: 8 Spinal Chakras. Beginning at the TOP link, move down the 8 rainbow beads, counting the chakras in Lite/Dark groups of two, each lite chakra paired with its dark partner.

Where here Will stands for the voluntary nervous system, some of whose plexuses are located along the spine. And Auto represents the Involuntary nervous system to which strictly speaking you cannot really focus your attention. However on this Auto bead one can contemplate the importance of our unconscious bodily operations and give them some appreciation..

Although we humans do not possess tails, the Neck/Tail pairing associates the cervical vertebrae with the coccyx (or tailbone).

The Lumbar is paired with the Perineum because both are saddle-shaped.

Move #3: 8 Hindu Chakras. These are my own variations on the seven classic Hindu chakras. The major changes are the addition of an eighth chakra (named Ground) so that the Dark/Lite pairing could be preserved. Also I invented simple traffic-sign-like symbols to replace the classic many-petaled lotus designs.

Starting at the BTM link and moving up the rainbow beads in Dark/Lite pairs we go:

I invented the new (dark) Ground Chakra as a partner to the classic (lite) Crown Chakra. The Ground Chakra represents our connection with the Earth and is located at the soles of the (bare) feet; the lite Crown Chakra represents our connection with Divinity and is situated at the top of the head. The dark circle symbolizing Ground could be the Moon or the Fertile Darkness; the lite circle symbolizing Crown could be the Sun or Cosmic Enlightenment.

The dark Root Chakra stands for Security, a solid place to sit; the lite Brow Chakra represents the Mind, or psychic powers. The symbol for the dark Root Chakra could be a plus sign --what is more basic than arithmetic?--or it could represent the anus, also called the fundament. The symbol for the lite (mind) Brow Chakra could represent the unknown quantity X or the Third Eye.

The vertical stroke in the dark Sex Chakra could represent either lingam or yoni; the horizontal stroke in its corresponding lite Throat Chakra could stand for either the vocal chords or the lips through which the voice emerges.

Move #4: 8 Sensual Chakras. These are eight ways your body interacts with the outside world.

Starting at TOP link we count down the rainbow beads in Lite/Dark pairs.

After visiting 72 chakras, we next enter the realm of the Three Bony Containers: 1. the Pelvic Basin, 2. the Rib Cage and 3. the Skull.

Move #6: 8 Pelvic & 8 Rib-cage Chakras. Starting at the BTM link we ascend the 8 rainbow beads in pairs. The Pelvic Chakras are all-Dark but we do not pair them here with their corresponding all-Lite Rib Cage Chakras.

Paying attention to only these 16 bones, you might notice that the Rib Cage resembles an upside-down Pelvic Basin.

92. Right Frontal Bone     93. Left Frontal Bone   94. Chin
95. Right Parietal Bone     96. Left Parietal Bone
97. Mandible
98. Right Occipital Bone   99. Left Occipital Bone
100. Inion
101, Right TM Joint         102. Left TM Joint
103. Foramen
104. Right Temporal Bone  105. Left Temporal Bone
106. Skull
Visiting these 18 Skull Chakras brings us to the DARK link where we finish off the 108 chakra rosary.
Move #8: Whole-Body and No-Body Chakras. Move from the DARK kink to the Dark Disk which represents the Whole-Body Chakra, paying attention to your body as a whole. Putting the rosary away or concealing it in one hand represents the No-Body Chakra, the whole Universe with a you-shaped hole cut out of it. Now expand your attention as best you can to fill the entire Cosmos. 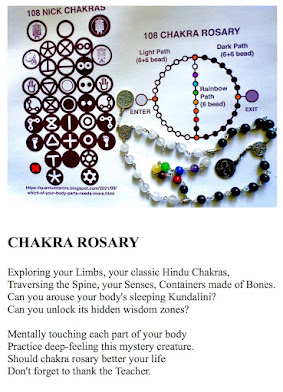