I first came to San Francisco from Ohio in the early sixties and was immediately attracted to the wonders of North Beach, dining upstairs family-style at the Basque Hotel or at the old Spaghetti Factory on Grant Avenue, witnessing the antics of would-be beatniks at the Coexistence Bagel Shop and especially browsing and buying books at Lawrence Ferlinghetti's City Lights Bookstore which was, and still is, the epicenter of San Francisco's vibrant literary scene. Scanning my bookshelf, I spot half a dozen or so of the City Lights published Pocket Poets paperbacks including Allen Ginsberg's Howl, of course, which anyone who wanted to seem cool had to flaunt, but also other Pocket Poet books, Kaddish, Planet News and The Fall of America by the same woolly-bearded prophet. Other of my Pocket Poets include Kenneth Patchen's Love Poems and Kora in Hell by William Carlos Williams. Somewhere in my piles of books is buried Ferlinghetti's own A Coney Island of the Mind, Pocket Poet book #1, which has sold more than one million copies. Eat your hearts out, poets!

Despite many visits to City Lights and other Bay Area poetry venues I never met Ferlinghetti but yesterday on Facebook I received an elegy from Neeli Cherkovski who knew him quite well, which I am taking the liberty of posting here. Farewell, grand old soul.

Ferlinghetti and I
Would go to the Surf Theater
Way out by Yokohama
He was an aggressive
Driver, his old Volkswagen
Bug had several dents.

Driving through the Stockton
Tunnel he'd proclaim,
"We're leaving the Casbah"
And he would chuckle
As he turned left on Van Ness
Leaving North Beach
And City Lights Books.

We saw a movie set in Paris.
The title escapes me, but
Lawrences's excitement
Over the sights, Notre Dame
In a side view, the Seine
Head-on, Apollinaire's shadow
On Boulevard St. Germaine.

"I should go for a visit," he said
"Like Henry Miller did."

Two days later we headed
To Bixby Canyon, he said
I could carve my name on
The outhouse wall alongside
Kerouac and Ginsberg.

We read from "Leaves
Of Grass" that night by
A campfire. "He's like
An older brother."
Lawrence said of Whitman.

A year later
He wrote from
Paris, "I'm bringing you
A new beret, made right
Here."

San Francisco, Paris,
Big Sur, an open
Heart who would
Never grow old,
Who would be an
Ancient bard, who
Would hold a lantern
In the dark.

He wrote
The dog
Trots freely
In the street" and
Told anyone
Who would listen
The secret meaning
Of Goya's greatest scenes. 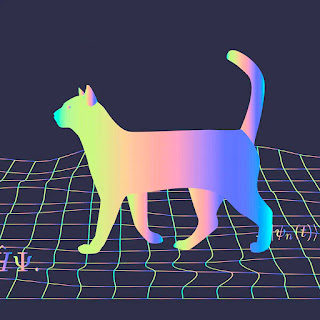 Tonight when we're in the mood to explore
I'd like to superpose my body with yours:
Schrödinger-Cat style.
Aligning both our buzzing possibility waves
Till each cell of mine's
In tight quantum connection
With each cell of thine.

Our hearts aligned, our pulses
Our lungs aligned, our breathings
Our brainwaves, pelvic twitches
Each capillary's motion
Completely in sync.

I'd like to merge with you fully, love,
In a way no other man has ever imagined.

Such aligned
Let's experience quantum entanglement
Warm and first-handedly
Not like equation in a book.

Of head, shoulder, knees and toes
Fingers, pelvis, both elbows.
Which part is me and which is not?
Neither one of us on top.

Then when we've learned what we can
From our first playful superposition
Let's fall asleep inside one another
Going to sleep me added to you.
Could both of us then experience
The world's first two-person dream?

Then waking up together
From our first quantum Cat Nap
Slowly breaking the superposition
Experiencing our mutual possibilities
Gently re-scrambling themselves
Like tangled bed clothing.

Alone now in my bed
I recall what I've read
About non-locality of the quantum kind:
No space between us, no time
So the physicists say.

So for billions of years, dear,
We've slept together this way.