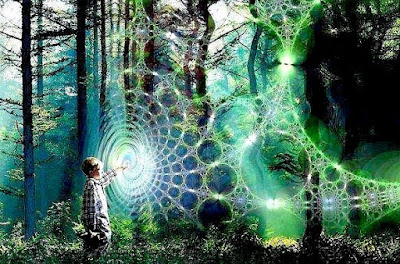 Nick - wonderful post! Your post has inspired me to make more quantum paintings as, of late, I have been distracted by my Marxist critique of New Age exploitative capitalism (see www.sacredgaiahealing.com and Facebook sites for Angelica Leight and Runceley Chaser). Thanks for the mention in your post ! It was lovely to see Erwin's Puss again - it now lives in the entry hallway to Griffith University's Centre for Quantum Dynamics headed by the urbane Professor Howard Wiseman. Lynden

And a very Happy Birthday to you today as well!

Nick,
Happy Blog Birthday!!! Thank you for enriching us all with your intellect, humor, physics, and poetry—and even wisdom!

https://www.youtube.com/watch?v=Wqj24ZCnp0A
This psychology professor quotes you via Robert Anton Wilson...
Congrats on your quantum tantra blog. I've practiced quantum tantra in real life for 10 years! (plus a few more).

HI Nick
I feel very honoured to be mentioned in your 10 year retrospective wrap up - thank you. Even though "Erwin's puss" is in a great locale (Centre for Quantum Dynamics at Griffith University Brisbane) I miss him and it was lovely to see an image of the painting in your post.

Cheers and best for 2020
Lynden

Thanks for a great article. Check out an interesting article we have just posted on Dynamic Meditation and Tantra