Exactly 100 years ago a remarkable paper appeared in Annalen der Physik, a prestigious German physics journal in which both Max Planck and Albert Einstein published their findings. This paper, by German physicist Paul Peter Ewald explained how light behaves when it strikes a sheet of glass. Ewald, in 1915, explained, in effect, how a window works. A few year later, Swedish physicist Carl Wilhelm Oseen extended these findings to explain how light behaves when it strikes a crystal. Together the work of these two men is known as the Ewald-Oseen Extinction Theorem.

(A new proof of the extinction theorem by Mansur Mansuripur has recently been published here,)

What's so mysterious about how a window works. Isn't a window merely a sheet of glass?

But those "in the know" realize that not only did Einstein prohibit anything from traveling faster than light, he also showed that light always travels at the same speed no matter who's looking at it. So both the notion of fast X-ray light and slow light in glass would seem to be outlawed by relativity. However this notion of fast and slow light in material media is being taught to high school students. It's called Snell's Law (and seems to have been discovered first by Arab physicist ibn Sahl during the Islamic Golden Age.

To fully appreciate the miraculousness of the Ewald-Oseen Extinction Theorem, we must first realize that glass consists of a random arrangement of electrically-excitable molecules. And that light is a traveling electromagnetic wave that will excite each of the molecules it encounters. Each excited molecule will emit a omni-directional light wave (of the same frequency as the incident light) in somewhat the same manner as an ocean buoy will emit a scattered wave when struck by an incident wave train.

But light approaching a sheet of glass is not just going to strike one buoy, but approximately 10^24 buoys or about 1 million billion billion buoys (electrical excitable molecules). And these buoys (in glass) are arranged in a random fashion. What is the first thing you would imagine happening if a wave of light impinged on a medium composed of zillions of randomly arranged excitable molecules? Total chaos. That's what I would guess. The window will turn into some sort of deeply frosted glass that will randomly scatter light in every direction.

If windows are made of zillions of randomly arranged excitable molecules, then windows can not be transparent. That's what I would predict.

The first optical miracle is that windows are transparent. But the second, third and fourth miracle are even better.

Ewald proves for random media like glass (and Oseen does the same for ordered media such as crystals), that the net result of all of those zillions of little excited light waves add up to zero in every direction but three.

Two more waves survive the Great Destruction -- the reflected wave that seems to bounce off the glass but in reality is created by zillions of tiny molecules all radiating with the proper timing to direct a beam only in the reflected direction (and no other) much in the manner of phased-array radar antennas which do not physically move but are aimed by changing the phase relation between separate fixed transmitters. The glass molecules (like the phased-radars) are radiating in all directions but in both radar and window pane destructive interference removes light from every direction except one.

The third wave that survives the Great Cancellation is the internally transmitted wave that travels into the glass at "Snell's angle" with a "slow" phase velocity of c/n. Everywhere inside the glass the little wavelets travel at velocity c, but the net product of all their activity is an effective slow-phase wave, produced, like the reflected wave, by a kind of internal phased-antenna array consisting of zillions of glass molecules.

Here then are four optical miracles:

1. That glass is transparent despite its consisting of zillions of randomly situated electrically-excitable molecules;

2. That the excitable medium, all by itself, completely extinguishes the incident wave;

3. That the excitable medium, all by itself, synthesizes a "reflected wave" traveling in exactly the right direction and no other.

4. That the excitable medium, all by itself, synthesizes an "internal wave" traveling in exactly the right direction (Snell's Law) and no other. 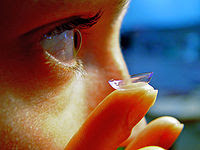 These four miracles apply not just to windows but to anything made of glass, or to anything transparent for that matter, such as the lenses in telescopes, the lenses in your cameras, your eyeglasses, your contact lenses, the living lens and the clear fluid that fills your eye. The inner operation of each of these optical devices is explained by the four-fold miraculous Ewald-Oseen Extinction Theorem. (Happy Hundreth Anniversary!)

Classical physics considered all of its waves to be "real", that is, made of something actually vibrating at every location where the wave exists. Quantum physics, on the other hand, considers its waves to be "unreal", that is, made only of sheer possibility. A light wave, for instance, represents only the possibility for a "photon" (or quantum of light) to be observed.

Quantum waves only become real in the act of observation, in a still mysterious process called by some "the collapse of the wave function".

What do you suppose the odds are for the photon to exit the window pane without collapsing its wave function? Because there seem to be a zillion ways for that photon to lose its phase, to shed its dignity, to become entangled with the randomly arrayed electrically-excitable mess that we call "a pane of glass", I would naively guess that a pane of glass must collapse the photon wave function with 100% certainty.

But this conclusion is wrong. For exactly the same reason that the window pane is transparent (namely the Ewald-Oseen Extinction Theorem), the window pane has a lot of fun with the photon but does not actually collapse its wave function.

This is the fifth optical miracle: Window panes do not collapse the photon wave function.

But inside your retina the photon wave function does somehow finally collapse into an actual event.

Which gives rise to this marvelous visual experience. 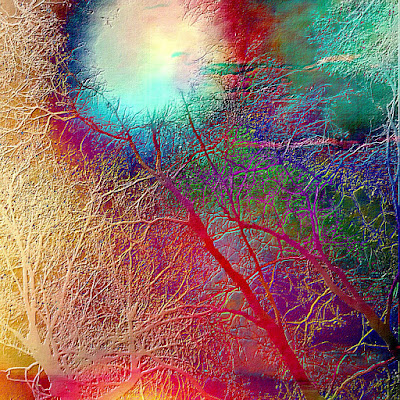 I'd love to own the Philosopher's Bone
As big and hard as Allah's own
With Physics, Joy and Math inside It
And me be man enough to ride It
On my board that buggers the imagination
I'd surf the Curly Crimp of Creation
I'm strong and smart; I'm a quantum knave
But where can I go to catch Her Wave?

Posted by nick herbert at 8:23 AM 1 comments 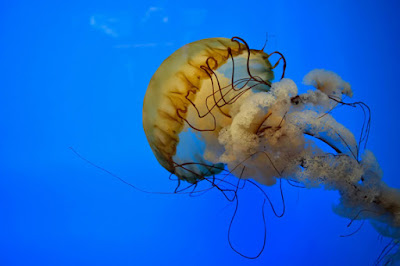 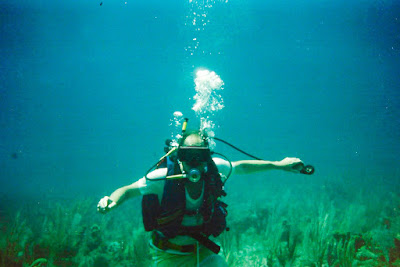