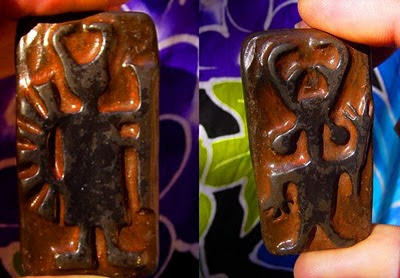 A new shop opened a week ago in Boulder Creek across the street from Blind Pilot Jewelry, selling things collected by Philomena, the proprietress, from dozens of thrift shops and bargain barns. Ostensibly a Valentine store, its too-ordinary facade suggested to me the classic science-fiction curio shop that covertly deals in alien artifacts. I chatted with P, bought a few things, and before I left, Philomena insisted on giving me this pocket-sized brown stone that I had previously admired. My suspicions increased when she refused to take money for it. It felt good in my hand but I could not figure out what it was nor where it had come from.

On each side is carved a humanoid figure in the style of aborigines or petroglyphs. Two figures engaged in some mysterious act. Could this strange carved stone be some sort of sophisticated communication device, a telepathy-based iPhone connecting me to beings in a parallel dimension?

The voices in my head suddenly started making sense.

They are hyper-erotic guardian angels. And they are desperately in love with life on Earth.

Come join our party:
We serves and protects
Will trade secrets of Nature
for sex.
Posted by nick herbert at 1:11 PM 2 comments 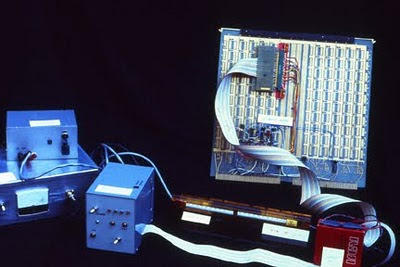 
But will she Lunarate on the first date?

The goal of quantum tantra is to open up new connections with Nature, using insights derived from quantum physics, to join human minds with one another and with the myriad invisible minds around us. There are hints of quantum tantra in the works of Schopenhauer, Wordsworth, and many science-fiction stories, but few have so concisely expressed the aim of the quantum tantrika better than deep ecologist Ted Roszak in his book Where the Wasteland Ends:

Suppose this ability we have to find something of ourselves in people should be expanded so that the same personal transaction occurred with animal and plant.

Suppose that ability began to reach out further still, discovering a reality of inventive pattern and communicative vitality even in what we once regarded as the dense, dead stuff of the world.

Suppose the whole of creation began to speak to us in the silent language of a deeply submerged kinship.

Suppose we even felt urged to reply courteously to this address of the environment and to join in open conversation.

Ah yes, what then? In my search for radically new communication channels with Nature, I have conceived, built and tested four Preposterous Devices, four real quantum machines whose premises are so silly that they almost certainly will fail to work. However, if even one of these devices strikes gold, it would change our concept of the Universe in a big way. I am encouraged in my quixotic quest by the fact that although we know a good deal about how matter operates, we know almost nothing about the way our own consciousness works and are supremely ignorant about non-human forms of awareness. And each one of my Preposterous Devices, which include the Metaphase Typewriter, the Quantum Metaphone, the Stellerator and the Lunarator, depends for its alleged operation on the X factor of consciousness.

The purpose of the Metaphase Typewriter (now retired due to decay of its radioactive core) was to provide a communication channel for discarnate spirits. The premise behind its operation is that quantum processes are so Heisenberg-uncertain that they can be manipulated by spirits. (Perhaps you too are a spirit manipulating your body via quantum processes in your brain.) The Typewriter consisted of a radioactive source, a Geiger counter and a computer interface. The quantum-random Geiger pulses were used to drive a typewriter whose operation was biased by second-order English language statistics. (We got these statistics from an unclassified NSA publication.) The Typewriter was tested in many "high-psychic-energy" environments--most notably an all-day event in San Francisco to contact the spirit of Harry Houdini. As one might expect when dealing with random events, several amusing coincidences occurred in these experiments but never any prolonged clear text from the other side.

The Quantum Metaphone uses the same quantum-random hardware as the Typewriter but is hooked to a Votrax speech synthesizer and biased with second-order English speech statistics. Robert Anton Wilson described the output of the Metaphone as sounding "like a Hungarian reading Finnegans Wake". The one psychic we exposed to the Metaphone (Matthew Manning) found it irritating and opted to influence (unsuccessfully) the quantum text generator.

Both the Stellerator and the Lunarator are attempts to quantum-entangle two human minds by exposing their eyes to coherent light. (The silly premise here is that quantum-entangled retinas might lead to quantum-entangled brains which in turn might entangle the associated minds.) The intent is to experience new forms of intimacy not accessible to those still mired in classical ways of thinking about the world. Since looking at laser light might be dangerous, I decided to use safer and more natural sources of coherent light, namely the Moon and the stars.

Visible stars possess a "radius of coherence" of several feet or larger so that when you and your partner look up at a star (and are close together) you are standing inside that star's coherence radius. But you are also standing inside lots of other star's coherence discs. The Stellerator is merely a hollow tube which allows you and your partner's retinas to be excited by light from the target star and no others. Does communal consciousness ensue when two or more people look thru tubes at the same star? The Stellerator was first tested by a gang of happy amateurs immersed in an Esalen hot tub on the edge of a cliff overlooking the Pacific Ocean under the starlit sky. No huge increase was observed in our already high level of conviviality.

The alleged effect of the Stellerator depends on the LARGE coherence radius of visible stars while the operation of the Lunarator depends on the SMALL coherence radius of moonlight. The coherence discs from the Moon are small enough to fit inside the light-adapted pupil of the human eye. In the Lunarator, moonlight is split by a half-silvered mirror so that half goes into his eye and the other half goes into hers. There is a sense in which you two are both competing for the same photons. I have built a version of the Lunarator but have not yet tested it. One a priori reason for doubting the possibility of Lunarator-induced empathy is that even if the Lunarator only induces a common mood (no signaling), it is easy to show that the presence or absence of such a mood could be used for signaling, and that signaling could, in principle, be superluminal.

I present these brief notes on Preposterous Devices to give some notion of the direction of research at the Quantum Tantric Ashram and hope that others may be inspired to develop even more preposterous quantum machines that will succeed in changing the consciousness of the experimenters in new and entirely unexpected ways.


Could you be
my quantum mate?
Let's go outdoors
and Lunarate. 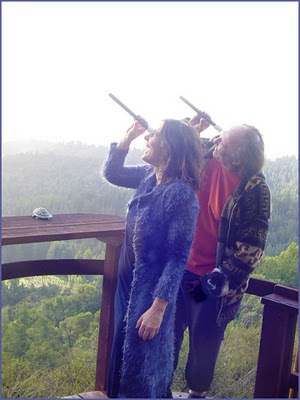 Sun and Allan test out the Stellerator
Posted by nick herbert at 5:55 PM 0 comments

Gist of the Sixties

Reality fans, here is an brief essay by John Perry Barlow that expresses the gist of the 60s better than anything I could ever hope to write:

LSD is a drug that produces fear in people who don’t take it. --Timothy Leary

It’s now almost half a century since that day in September 1961 when a mysterious fellow named Michael Hollingshead made an appointment to meet Professor Timothy Leary over lunch at the Harvard Faculty Club. When they met in the foyer, Hollingshead was carrying with him a quart jar of sugar paste into which he had infused a gram of Sandoz LSD. He had smeared this goo all over his own increasingly abstract consciousness and it still contained, by his own reckoning, 4,975 strong (200 mcg) doses of LSD. The mouth of that jar became perhaps the most significant of the fumaroles from which the ‘60s blew forth.

Much much more at Reality Sandwich.
Posted by nick herbert at 12:12 PM 1 comments

In These Five Remaining Days 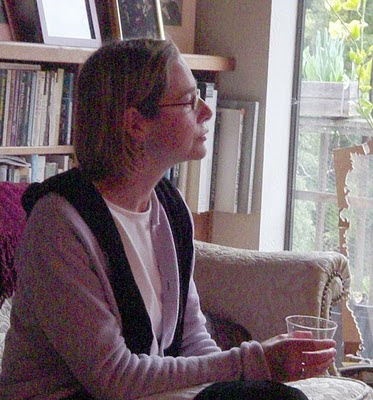 In These Five Remaining Days
after Hafeez

In these five remaing days, I see
I've spent my life bellowing like a mule
feeling broken beneath a burden
that was mine to learn to carry
or the weight of another's I could not ease.

In these four remaining days. the robe
that has been my body, revels on
its own unraveling. Inside, a hummingbird
hovers; half-inside a flower, then zips
away, stitching the sky with iridescence.

In these three remaining days, I am still,
knowing what ripens below, soon breaks
through the duff, finds some light--
a rose-colored mushroom, quietly
glistens in the redwood mist.

On this, the second to last day, I ride
a riptide out to sea, find myself
fixed again to the ocean's umbilicus.
Rocked upon her heaving breast, I taste
the briny tears we share, let go my thirst. 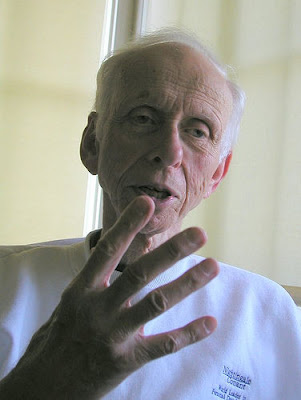 George Burr Leonard, farewell, Sir. The Earth is bereft of one of its most elegant warriors.
Posted by nick herbert at 3:33 PM 1 comments 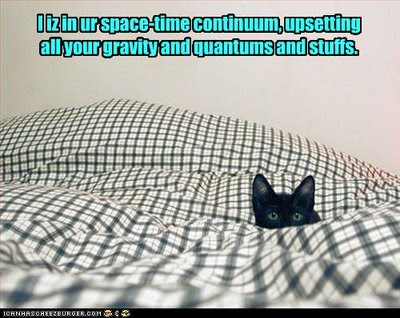 from I Can Has Cheezburger?
Posted by nick herbert at 11:11 AM 4 comments 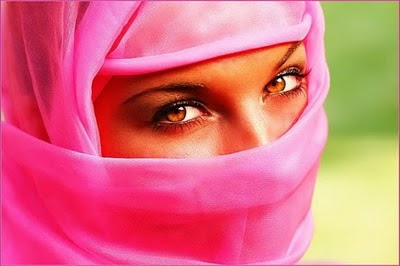 Got a great Blue Moon gift from my Muse this week--4 new lines from Claire for inclusion in The New Sex Robot. I've just updated TNSR by adding this: