Those old daddies cursed you and us in you,
damned for your curiosity: for your sin
was wanting knowledge. To try, to taste,
to take into the body, into the brain
and turn each thing, each sign, each factoid
round and round as new facets glint and white
fractures into colors and the image breaks
into crystal fragments that pierce the nerves
while the brain casts the chips into patterns.

Each experiment sticks a finger deep in the pie,
dares existence, blows a horn in the ear
of belief, lets the nasty and difficult brats
of real questions into the still air
of the desiccated parlor of stasis.
What we all know to be true, constant,
melts like frost landscapes on a window
in a jet of steam. How many last words
in how many dead languages would translate into,
But what happens if I, and Whoops!

We see Adam wagging his tail, good dog, good
dog, while you and the snake shimmy up the tree,
lab partners in a dance of will and hunger,
that thirst not of the flesh but of the brain.
Men always think women are wanting sex,
cock, snake, when it is the world she's after.
Then birth trauma for the first conceived kid
of the ego, I think therefore I am, I
kick the tree, who am I, why am I,
going, going to die, die, die.

You are indeed the mother of invention,
the first scientist. Your name means
life: finite, dynamic, swimming against
the current of time, tasting, testing,
eating knowledge like any other nutrient.
We are all the children of your bright hunger.
We are all products of that first experiment,
for if death was the worm in that apple,
the seeds were freedom
and the flowering of choice.
Posted by nick herbert at 1:11 PM 0 comments 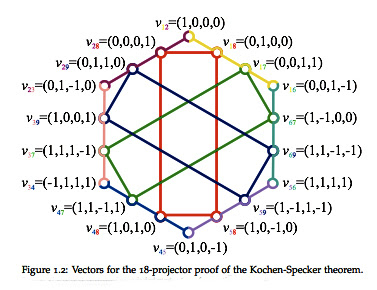 Quantum theory--now almost a century old--is the most powerful predictive tool that humans have ever possessed. Tested in thousands of subtle experiments by hundreds of Nobel-hungry physicists, quantum theory has always been right--its most recent success: the prediction of the existence and properties of the newly-discovered Higgs boson. However this predictive success comes at a high price--the lack of a good conceptual model of how the world actually works. Quantum theory is so strange that it resists any picture we might try to make about "what's really happening" in the world. Use this tool--give up models of reality.

I have described some of the history of the search for pictures of "the way the world really works" in my book Quantum Reality. Recently Marcus Araujo Santos working at the Federal University of Minas Gerais in Brazil has published a long review of recent attempts to construct "reasonable ontological models" that reproduce the quantum facts. His work Quantum Realism and Quantum Surrealism is highly technical but interspersed with witty and thoughtful discussions that systematically motivate the various definitions and proofs.

For any physicist seriously interested in quantum foundations, QRQS is a treasure trove--beginning with concise summaries of von Neumann's, Gleason's and Busch's theorems, nested strategies for proving the Kochen-Spechen theorem and then on to the meat of the essay, which provides fresh ways of excluding "non-contextual models of reality" through new restrictions called "Boolean Inequalities" after Irishman George Boole who formalized the laws of classical logic in the 19th century.

The central question Santos asks is "What is the core reason that quantum theory seems so weird? Exactly where lies the 'magic' that separates the quantum world from our classical way of thinking?"

Santos's chosen path to "quantum magic" is to clarify what we mean by "classical reality" by refining the definition of a property called "contextuality". Classical reality is non-contextual. By holding contextuality up to a strong light, and by deriving new means to test its presence in quantum reality, Santos and his colleagues hope to better illuminate the essential strangeness of the most powerful theory of the world we possess.

Few readers of this blog will be able to appreciate the high quality of exposition of Santos's work, but those with eyes to see will find QRQS a tremendously valuable resource that might well inspire their own quests for a fresh glimpse of the "extraordinary quantum magic" that underlies the ordinary world.

On a lighter note, Allan Lundell from the Chakralicious Camp at Burning Man 2012 sent me this short clip of Lisa Woffington reading Does She Do Vulcan Mind Meld on the First Date? from Harlot Nature.

In Fourteen Other Star Systems 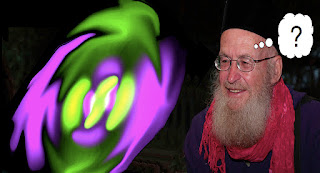 IN FOURTEEN OTHER STAR SYSTEMS

But Cosmic Contact's
not a bed of roses:
Among the hundred Quantum Joys of Union
lie a thousand ways to give profound offense.

In fourteen other star systems
Nick could make a choice
that would brand him in the larger Universe
as child molester, criminal against Nature,
practitioner of the Unspeakable Abomination
and friend of the Ultimate Evil Under the Skin.