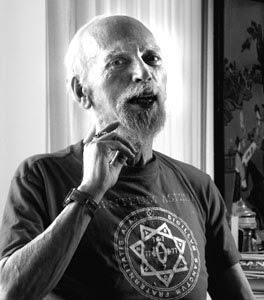 Writer-philosopher Robert Anton Wilson departed the physical plane exactly two years ago at his home in Capitola, CA on 1/11/07. (For those fascinated by numerology "o7" is "111" in binary notation.)

Bob Wilson is best known for his numerous books, most notably the Illuminatus! Trilogy (with fellow Playboy editor Robert Shea) which aspires to describe the Mother of All Conspiracy Theories, the semi-autobiographical Cosmic Trigger and (my favorite) his Schrödinger Cat Trilogy featuring an innocent sex researcher who becomes entangled in ludicrous schemes. Bob (along with his red-headed wife Arlen) also hosted wherever they happened to live--whether Berkeley, Dublin, or Capitola--an ongoing salon of cutting-edge intellects. Bob and Arlen loved witty conversations and odd personalities. Many of my friends I first met in and around Robert Anton Wilson's circle--Bob was a "strange attractor" who liked to use his friends as material for his writings.
One of my favorite Wilson events was a large Temporary Autonomous Zone (TAZ) celebration organized by underground impresario Joseph Matheny in a San Francisco warehouse, where I recited some early quantum tantra rants alongside skits by Bob himself, performance astrologer Rob Brezsny, shit-kicking essayist Peter Lamborn Wilson and numerous other celebrities on both sides of the proscenium. I also remember racing in a Jeep thru the night streets of New York with Bob in order to be interviewed on Hakim Bey's Moorish Orthodox Radio Crusade on WBAI in the wee hours of the morning. Later Hakim Bey penned a fine obituary for good old RAW. Bob Wilson also starred, along with science-fiction writer Rudy Rucker and psychedelic philosopher Terence McKenna in an experimental film Naked Minds that has yet to be released.
Like his pals McKenna and Leary, Wilson possessed in great measure that verbal inventiveness the Irish call "blarney" and the man crafted many a memorable phrase. My favorite RAW quote: "Reality is where two rival shamans fought each other to a standstill."
As his physical powers waned (he suffered from post-polio syndrome), Bob discovered the World Wide Web and was soon spreading his demented wisdom across the Internet. Where one can still investigate his Maybe Logic Academy and his Guns and Dope Party.
In common with millions of freedom-loving Americans, Bob Wilson supported the right of mature adults to smoke "anything they damn well please." A few years back he served as a judge at the annual Cannabis Cup competition in Amsterdam. His favorite authors were James Joyce, Ezra Pound and Raymond Chandler.
After Bob died, his ashes were scattered in Monterey Bay joining wife Arlen's as we revelers partied and followed the progress of his deathboat with Irish harpist at the prow from the windows of the fabled Coconut Grove on the Santa Cruz Beach Boardwalk. Pictures from Bob's Final Party are posted here and here.
Goodbye, Mr. Wilson. This world is poorer without you.
Posted by nick herbert at 11:11 AM

"Reality is where two rival shamans fought each other to a standstill."

I rolled this quote around in my brain and found continually deeper and stranger metaphors.

I can see the Fnords.