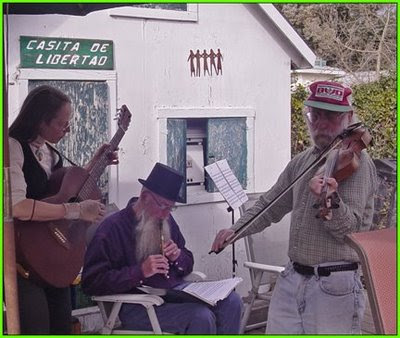 "The Wearing of the Green" is an anonymously-penned Irish street ballad dating to 1798. The context of the song is the repression around the time of the Irish Rebellion of 1798. Wearing a shamrock in the "caubeen" (hat) was a sign of rebellion and green was the colour of the Society of the United Irishmen, a republican revolutionary organisation. During the period, displaying revolutionary insignia was made punishable by hanging. (Wikipedia)

O Paddy dear, and did ye hear the news that's goin' round?
The shamrock is by law forbid to grow on Irish ground!
No more Saint Patrick's Day we'll keep, his color can't be seen
For there's a cruel law ag'in the Wearin' o' the Green.

I met with Napper Tandy, and he took me by the hand
And he said, "How's poor old Ireland, and how does she stand?"
"She's the most distressful country that ever yet was seen
For they're hanging men and women there for the Wearin' o' the Green."

So if the color we must wear be England's cruel red
Let it remind us of the blood that Irishmen have shed
And pull the shamrock from your hat, and throw it on the sod
But never fear, 'twill take root there, though underfoot 'tis trod.

When laws can stop the blades of grass from growin' as they grow
And when the leaves in summer-time their color dare not show
Then I will change the color too I wear in my caubeen
But till that day, please God, I'll stick to the Wearin' o' the Green.