A Book About Reality 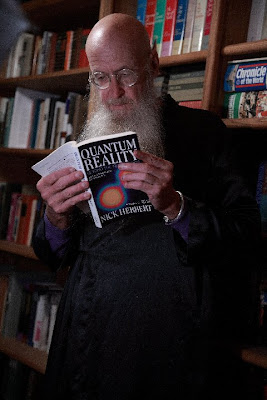 Quantum theory is without doubt the most successful tool for manipulating matter that humans have ever possessed. Over scales ranging from quarks to quasars not one of quantum theory's predictions (some checked to 11 decimal places) has ever been falsified. Much of today's industry--silicon chips, lasers, hard drives, flash memory, for example--would be impossible without the precise understanding of matter's behavior that quantum theory provides.

But this overwhelming success comes with a peculiar price tag: Use this theory; lose Reality.
The deepest unsolved question of quantum theory is this: how can we properly conceive a model of the world for which quantum theory is a correct description? No one has posed the Quantum Reality Question better than UCSC professor Bruce Rosenblum who says: "Classical physics could explain the world but got some of the details wrong; quantum physics gets all the details right but can't explain the world."
Quantum theory describes the world in two ways, depending on whether it's being measured or not. When not measured, it's described by a wave of probabilities (called the psi-function); when it's measured, it turns into actual particles.
The Quantum Reality Question resolves itself into two parts:
1) The Interpretation Question: what does the psi-function actually stand for? What in the world is going on when we aren't making measurements?
2) The Measurement Problem: what happens during a measurement when (in the theory at least) waves turn into actual particles?
A successful Quantum Reality would tell us: 1) what the world is like when it's not looked at and 2) how the act of looking changes the unobserved world into the world we see.
In my book Quantum Reality: Beyond the New Physics I consider eight candidate models for a viable way of conceptualizing the world including Hugh Everett's Many-Universe Model (QR #4) and Werner Heisenberg's version (QR #8).
In Everett's Many-Universe Model, the psi-function describes not possibilities but actualities--Everything that can happen really does happen in one universe or another. That's what's going on in the world when you don't look. When you look, the universe you happen to be in splits into all possible outcomes of the measurement you chose to make but you are conscious of inhabiting only one of these branching paths. As preposterous as this model appears it ranks as the most detailed and mathematically consistent model of Quantum Reality yet put forth. The fact that such an outlandish model of reality is taken seriously by smart people is a measure of how desperate physicists have become in their quest to solve the Quantum Reality Question.
Heisenberg's Model proposes that there is only one world. But when nobody looks it's just a world of possibilities. Whenever somebody looks, one of these possibilities becomes actual. Heisenberg fails to tell us though, how the first real look happened in a world of pure possibility, nor does he say what a look looks like--that is, which sorts of interactions in the world qualify as "looks" and which are merely inconsequential dances of possibilities.
Unlike many popular physics books that trumpet the colorful successes of physics, Quantum Reality focuses single-mindedly on physics' most conspicuous failure--the Quantum Reality Question as the most embarrassing skeleton pushed way into the back of physics' secret closet. Quantum Reality explores in great detail a deep and glaringly unsolved problem located not in the hidden recesses of elementary particles or in some galaxy far away but right here at home--an unsolved mystery located literally everywhere we look.
None of the eight proposed Quantum Realities (and others since invented) feels right to me. No one today, I think, really knows how this world works. One easy way to fluster a physicist: ask what he/she thinks of the Measurement Problem.
Quantum Reality has been translated into German, Japanese and Portuguese. Nick gets about $1 in royalties for every copy sold. Recently made available (Dec 2011) as an E-book. 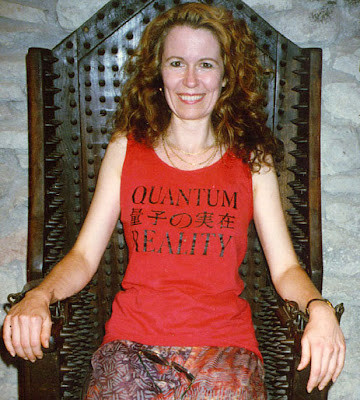 What about idealism? Do you think the mystics could be right that all is consciousness?

A bunch of us proposed to test the idealist hypothesis by physical means in a scheme called "The AMY Project".

None of our schemes could do the job, alas. See http://members.cruzio.com/~quanta/amy.html for more details.

Thanks for the reply, Nick! The article was interesting. Correct me if I'm wrong, though, but it seems like you couldn't prove the matter one way or the other.

In any event, I'd be interested to hear what you think about Richard Conn Henry's ideas on QM published in this letter: http://henry.pha.jhu.edu/scandal.pdf

Also, are you a member of SSE? They're holding their conference at the IONS campus next year and if you come I'd love to meet you!

Howdy, Nick. I finished your book Quantum Reality. Your book is one of the better explanations of Bell's experiment, though I had to reread that chapter several times till I thought I could put the gist of the matter into my own words in explanation to another. A good read.

I also wrote you an email from quanta@cruzio.com that's posted on your Web site.

I've written a fascinating tome entitled, A Treatise on the Nature of Life. I've mapped a range of parameters from biological cognition onto a domain which may shed some light on the consciousness dilemma eg. phase collapse. The energy of biological consciousness is interesting ... !

The pdf file is a short, hopefully fascinating twenty page read, and can be downloaded from my Apple Web site here.

Any constructive criticism of the treatise is welcomed.

Question: I have a sense of humour so I became a member of the Richard Dawkins forum. All of my input has been 'relegated' to their 'Debunking Woo' forum. Here is the Forum's definition of 'Woo':

"A thread qualifies as 'woo' if it matches the following description:

Any argument based upon emotions, mysticism, or spiritualism; evidence provided other than rational or scientific; mysterious; new age beliefs.

A thread's presence in this subforum is not necessarily a statement regarding the veracity of the claims proposed by the topic's initiator, but rather decided by the subject matter of a given thread."

So there we are. I have been debating also with another member there, a young man who claims he has 300 books on 'real science' including QM and so on, and will not suffer woo-ists's claims. We have been debating about a supposed incident in South Africa in the 1990s when a group of schoolchidren claimed to have seen a UFO and had an encounter with 'ETs'/

But my main question Nick is hwo do you account for people supposedly 'well-versed' in QM yet will have this attitude to --shall we say--weird phenomena macroscopically they will call woo?

All the theories in the world cannot stand against one confirmed fact. If your African friends truly connected with some alien entity, no amount of physics can gainsay this fact. However, as Richard Feynman said, "The most important thing in science is not to fool yourself. And you're the easiest one to fool." As far as I can tell from "alien encounters" not a single bit of useful non-human physics nor truly alien artifact
has turned up. I am inclined to believe in Jung's speculation that religious apparitions (such as Mary and the saints) have more in common with UFO experiences than anything we see on Star Trek.

The world is full of really weird shit--quantum mechanics, LSD and deep sexuality, for starts. But, as always, the proof is in the pudding.
Bottom line: Beneath all the words, what can you actually DO with what you think you know?

Very interesting reply Nick. I am in big part with you. For example, I recently read Patrick Harpur's book which greatly emphasizes how (for the author it seems 'all', though I have had private communications with himwhere he APPEARS to contradict that position..?...)UFOs and 'abductions' and other strange events which seem to be 'real' are of the Imagination, as Jung would describe it, and that very strangley --which neither orthodox religion nor ecurrent science can explain--they can be both physical and yet of the Imagination...? So they can leave evidence! (Daimonic Reality: A Field Guide to the Otherworld, Patrick Harpur)

As I was reading him though, I also had in mind about The Disclosure Project where supposed 'insiders' give testimony to the actuality of real ET craft and entities, and also secret knowledge of advanced technology back-engineered. What are we to do with THIS evidence. Ie., the definition of "evidence" also includes bearing witness doesn't it? WHY would these people do this?
I dont trust Steven Greer, but am intrigued by the other speakers. Two I think said that they had witnessed UFOs disengage nuclear warheads.
The 'aliens' who met those South African children warned that we were hurting nature~~~

Hey Nick,
I don't want to be annoying, but I would be very interested in hearing your thoughts on Richard Conn Henry's idealist interpretation of QM: http://henry.pha.jhu.edu/scandal.pdf

On the reliability of human testimony I am reminded of the motto of the Royal Society of London: "Nullius in Verba" which loosely translated means:
"People lie; Nature doesn't."

the beginningless is nothing but nothing cannot be
so in no time at all there was infinity
infinity can be anything
but nothing it cannot be
betwixt and between the two
is called eternity.

There is a mathematical theory, its origins in quantum theory, which indicates the universe is flashing on and off (coming into and going out of existence) million of times every second.
While the universe is "off" there must be a physical state of nothing and because nothing doesn't need anything to put it there this theory gives us an answer to the greatest mystery of all... how did things get here?