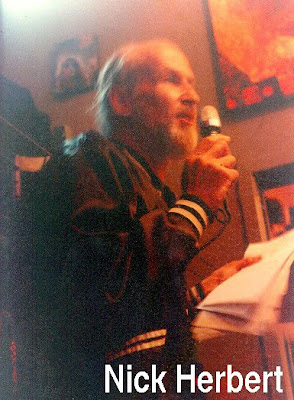 The boisterous BC Bistroscene could not be confined to physical reality. In addition to its lovely meat presence at Conrad's Bistro, our poetry spilled out, courtesy of poetry impresario J. J. Webb, into deep as yet unsettled regions of cyberspace. The very first poetry avatar I ever saw was a primitive representation of JJ himself reciting one of his poems on (then video game designer now temple directress) Alx Utterman's big video screens. To me, JJ's avatar looked like Bluto from the Popeye comic strip. (In real life, JJ looks entirely different.)

In 1993, J.J. Webb set up a poetry site on Cruzio ISP, first calling it The Hawk, then later morphing into Zero City, showcasing exciting new poets from all over the map. Zero City was co-edited by Olympia, WA poet Michael McNeilley, who, among his many feats, hosted a site Earth Sucks (now in disrepair since McNeilley's untimely death) allegedly run by Vogons, the alien race made famous in Douglas Adams' Hitchhiker's Guide to the Galaxy. Last time I checked, the poetry page on McNeilley's Vogon site seems to have been mercifully put to sleep. For, as The Guide informs us, Vogons are infamous for composing the fourth worst poetry in the Galaxy. Reciting Vogon poetry against a person's will violates the ban against "cruel and unusual punishment" enforced by almost every member of the Galactic Club. McNeilley had the habit of putting up his friends' poetry on the Vogon Verse section of Earth Sucks, a back-handed form of recognition to which I secretly aspired.

So check out Jailbait: Sixteen Barely Legal Web-Ready Love Poems and then, when you're ready for something completely different, bop over to Beau Blue's Cruzio Cafe for some innovative twists on presenting poetry performances on the web. Watch poets performing 24/7 inside J. J. Webb's ever-evolving cyber-tent: Great balls o' fire, Mollie, it's fulla poets! And they twitchin', they writhin', they squirmin', they crawlin' on they bellies like reptiles!