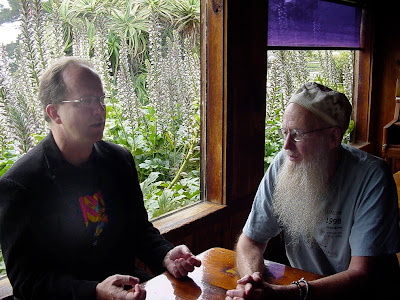 Jeffrey Kripal & Nick Herbert, Esalen Lodge, July 2010
Jeffrey Kripal is the chairman of the religious studies department of Rice University in Houston, author of many books including a study of sexual mysticism in the world's major religions and an official history of Esalen Institute construed as a center for the development of "Western Tantra". Because so many of our interests coincide I had been corresponding with Jeffrey but we have never met.

For almost 50 years Esalen Institute in Big Sur, CA has been at the forefront of new developments in psychology, bodywork, arts and science. Founded in the early 60s by Michael Murphy and Dick Price, Esalen, on account of its many daring and pathbreaking programs, might be considered a Large Hadron Collider of the human spirit. I was first introduced to Esalen by a Stanford classmate, who invited me to visit the grounds before Esalen had begun, to hear a talk by Mike Murphy's teacher Frederic Spiegelberg about his 5 second "psychic X-ray" by the Indian mystic Shri Aurobindo. I immediately fell in love with the place and its people and have returned many times since as student, teacher and guest.

For the month of July, Jeffrey Kripal and his wife have been in residence at Esalen leading a course for work scholars called Sex of the Spirit and generously offered a day at the Institute to me and a female companion. Lots of things are happening at Esalen this year. Michael Murphy is turning 80, Anna Halprin, legendary San Francisco dancer is turning 90 and leading a workshop there this month. And the day I decided to accept Jeffrey's offer, he was also awaiting the arrival of Dr Jenny Wade, the author of Transcendent Sex, When Lovemaking Opens the Veil, a study of 91 people who were swept away into drastically altered states just by "doin' it."

Meeting in the Esalen lodge, Jeffrey and I shared our "origin stories" and inspired others at the lunch table to contribute their own experiences revolving around sex, religion and other human passions. Lots of laughter ensued. The Esalen cuisine, always a delight, was crowned by a thick soup made of curry, coconut and sweet yams.

Then I asked Jeffrey to treat us a to tour of the Esalen grounds as seen thru the eyes of its official biographer. We began at Fritz Perls's old house, walked past the newly erected stage for the Esalen International Arts Festival, walked thru the spectacular Esalen gardens where much of the food we had just consumed had been grown, visited the George Leonard Memorial Dance Pavilion. Then we passed thru an iron gate which Jeffrey had never seen before which was made in the shape of a human face and unlatched by moving a lever which removed the figure's tongue from a narrow slot. We toured the children's Gazebo, the Art Barn, the Big House (where I had participated in so many quantum physics seminars in the 70s and 80s) and the Meditation Hut spanning Hot Springs Creek. We were interrupted on the waterfall path by a woman who questioned Jeffrey about a cow-headed goddess she had encountered the night before in a dream. In the middle of the lawn my companion and I leprechaun-blessed the grounds with a medley of Irish tunes accompanied by the squawks of a dozen sea lions from a small offshore island.

After Jeffrey left to welcome the author of Transcendent Sex, my companion and I descended the cliffside path to experience the Esalen hot sulfur baths. After being destroyed by slides in 1998, Esalen's famous old concrete baths are being rebuilt with a strikingly modern aesthetic suggestive both of ancient Roman baths and Art Deco pleasure domes. Disrobing, showering in view of the Pacific, slipping into the hot tub, silent massages going on around us, we wordlessly merged with the light, the air, the water and one another's presence. Home at last!
Posted by nick herbert at 5:55 PM