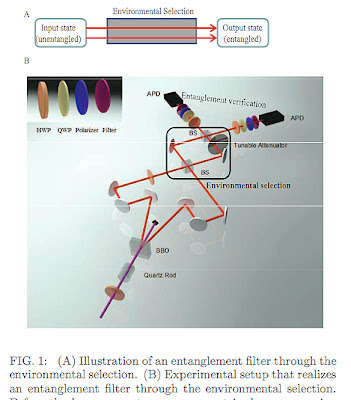 Quantum reality is certainly bizarre, theoretically permitting an animal to be both dead and alive (Schrödinger's Cat), particles that can be in two places at once (double-slit experiment) and distant causations that seem to travel faster-than-light (Bell's theorem). Since quantum reality underlies the world we live in, why does none of this quantum weirdness ever seem to surface into everyday life?
One persuasive solution to the everyday absence of quantum weirdness is "quantum Darwinism"--a concept pioneered by Polish-American physicist Wojciech Zurek, now working at Los Alamos, New Mexico. Quantum Darwinism is the notion that quantum systems are never isolated but are always interacting with an external "environment". It is the nature of normal environments that they randomize the phases of certain observables (decoherence) thus destroying monstrosities like Schrödinger's Cat while leaving other special observables intact (einselection). Thus quantum weirdness, absolutely normal in the wild, is effectively suppressed when quantum systems are moved "to civilization", that is, to a complex environment governed by lots of ordinary interactions.
But suppose we could construct "special environments" (jungles), designed to "einselect" non-ordinary realities? Could we then elevate some of the queer features of quantum reality into ordinary perception.
Recently Zu and his colleagues at the Center for Quantum Information in Beijing, China did just that.
Zu and his pals took a pair of independent photons A and B and sent them thru a special environment that "killed non-entangled photons".
Since the A and B photons are unentangled, an entanglement-hostile environment should kill them all. But Zu and company have prepared a very special environment. Using the rules of quantum theory, an unentangled pair of photons can be expressed as a sum of 1. an entangled pair plus 2. an anti-entangled pair. And the environment in the Shanghai lab is constructed so that it kills only anti-entangled photon pairs. Thus by selectively removing one kind of entanglement, this experiment can create entanglement where none had before existed.
(1 - 1 = 0. Take away the -1 and you seemingly create "1" out of nothing. Such is the logic of quantum reality.)
A similar logic is at work in Edwin Land's invention of the sheet polarizing filter that plays an essential role in every flat-screen LCD display. Ordinary light is unpolarized--an equal mixture of every polarization. Quantum-mechanically we can represent this situation as a random mixture of completely Horizontally-polarized photons |H> and completely Vertically-polarized photons |V>. Land invented a plastic sheet (special environment) that would preferentially absorb |V> photons. Pass random light thru a Land sheet and Horizontally-polarized photons emerge. Pass a random pair of photons thru a Zu et al environment and entangled pairs emerge (from the jungle).
To quote from Zu et al abstract: "We report an experiment that uses the environmental selection, a key concept in the recent theory of quantum Darwinism, as a mechanism to realize the entanglement filter, a useful quantum information device that filters out certain entangled states. In the experiment the environment of two qubits is controlled to favor an entangled state and to kill all competing components in the input state. The initial state has vanishing entanglement, but the state surviving after interaction is close to a maximally entangled state with an entanglement fidelity of 94.7 ± 1.9 % measured through the quantum state tomography. We experimentally demonstrate that the generated entanglement is robust under change of the initial state configurations and the environmental parameters."
C. Zu, Y-X Wang, X-Y Chang, P-Y Hou, H-X Yang, L-M Duan; Experimental Realization of an Entanglement Filter Through the Environmental Selection
Posted by nick herbert at 5:55 PM

Spare a little time to glance at 'Ghosts are REAL' website. This basically about how 'Mind' can capture 'entangled information' and 'fix' it in a suitable medium for 'capture' by camera. These quantum laws seem to operate at a macroscopic level, and may underpin what life actually is ("Quantum computation at ambient temperature").

The most exciting aspect of quantum Darwinism may be the presence of a Darwinian process at the basis of our reality.

Quantum Darwinism describes quantum decoherence as the process of selecting normal classical states from the vast numbers of weird quantum possibilities. It is only information that describes the quantum system as a classical system which can survive the act being copied to its environment.

six sigma Online Training will be very beneficial to anyone planning to
take the course. Topics that are discussed in the course includes a brief history of the standard and then discussing
the advantages this international model provides to any organization.

Hi Nick - this is perhaps one of your best blog postings ever. The intersection of photonic quantum entanglement, consciousness and what is sometimes referred to as "focused intentionality" as a definable, physical process is a topic I have pursued for decades.

There is much more to this than what the "general population" has any conceptual awareness of, although that is changing . . . slowly, very slowly, but a discernible change of awareness is occurring. Don't want to plunge into all sorts of detail minutia about my particular biophysical model for such here, but I do very much appreciate that you are posting this topic for consideration.