Which of Your Body Parts Needs More Amour?


Quantum Tantra represents an as yet unrealized new kind of physics that hopes to connect with Nature in a direct and more intimate way than merely "physicists making measurements". Quantum tantrikas seek a new way of knowing the "inanimate world" analogous to the mysterious way we presently experience our own bodies. Systematically experiencing our own bodies could be good practice for some day experiencing the physical world in a brand new (quantum) way.

To that end, Nick Herbert has been developing an original system of body chakras to aid in exploring this great corporal gift we've been given, both for its own sake and in preparation for a new (possibly quantum) way of enjoying our own body and the physical world.

This chakra project began when Nick was studying for his physics degree in the '60s while at the same time working at a psychic book shop (East-West Books) in Menlo Park, California. At that time so many new particles were being added to the physicist's worldview, Nick wondered why the number of bodily chakras had remained the same for centuries despite advances in meditation techniques and yes, the advent of new and more efficient psychedelic drugs.

Nick's immediate goal was to expand the number of classical chakras using two rules: 1. As in particle physics where each (fermionic) particle has an antiparticle, each chakra should possess an antichakra; 2. Each chakra should be represented by its own symbol (preferably some simple geometric form) with its "antichakra" represented by a black-white reversal of that form.

Progress in this program has been reported in three previous blog posts: Sixty-four Chakras, Eighty-four Chakras and Ninety-nine Chakras along with more background and justification for this unusual project. After working and playing with this notion for more than fifty years, Nick has finally decided on a total of 108 chakras -- 108 different places to situate your awareness and your willed action. 108 different playgrounds in which to exercise your imagination.

The lighter symbols are chakras, and the darker versions are antichakras. This convention is maintained for the first 72 chakras but is slightly modified for the rest of the group.

The Eight Spinal Chakras: "Will" and "Auto" represent the voluntary and involuntary nervous systems as objects of conscious attention. Note the nice chakra and antichakra organization.

The Eight Sensory Chakras. Note that the Lungs and the Bowels are highlighted as two important ways our bodies interact with the outside world.

Twenty-four Hand & Foot Chakras. Six chakras each: whole hand plus five fingers; whole foot plus five toes. Note that the antichakra of each hand is the corresponding foot chakra.

Thirty-six Special Chakras plus the foregoing Seventy-two chakras round out the total to one hundred and eight. The Special Chakras include the two Girdle Groups: Eight Pelvic Girdle chakras and Eight Shoulder Girdle chakras; the Eighteen Cranial chakras; the single Full-Body chakra plus the final No-Body chakra.
The Eight Pelvic Girdle chakras are antichakras to the Eight Shoulder Girdle chakras. Note that in this system, the sternum is homologous to the sacrum and the two clavicles are homologous to the two pubic bones.
Eighteen Cranial Chakras. In this special case, the chakra/anti-chakra convention does not apply. Here the light circles/ dark circles correspond to paired and unpaired anatomical forms. For instance there is only one inion and two temporal lobes. The former is symbolized by a dark circle; the latter by a light circle. The cranium itself is single (should be a dark circle) preserving the symmetry: six paired and six unpaired Cranial Chakras.

The final two chakras represent 1. The Whole-body Chakra, experiencing your entire body without breaking it into parts, and 2. Its antichakra the No-body Chakra symbolizing the contemplation of the entire physical universe with a small you-shaped piece cut out of it.

Purely by accident these 108 Nick chakras correspond to the 108 beads in a traditional Indian japamala. 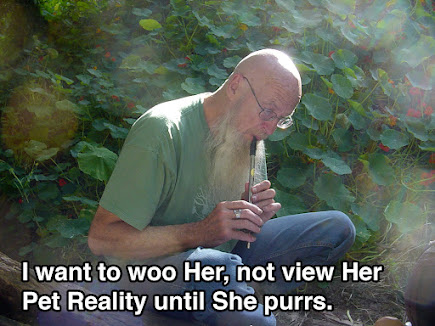 Speaking of chakras, I recently found this interesting 2019 report on quantum thermodynamics, which I thought to share with you. Herbert Benson published his original research on g-tummo in Nature back in 1982 and continued to study these phenomenon through the 1990's. His work was updated in 2013 with results published in PLOS/ONE showing that the neurocognitive component (maintaining conscious imagery at various points of the subtle body) was necessary for raising the core body temperature into the fever zone. A mechanism for this comes from the Huping Hu and Maoxin Wu paper, published in Medical Hypotheses in 2007, Spin-Mediated Consciousness: Theory, Experimental Studies, Further Development & Related Topics but the thermodynamic seems mysterious - at least to me. So I find this recent paper, Reversing the direction of heat flow using quantum correlations, where they observe spontaneous energy flow from the cold to the hot system, using correlated spin 1/2 qubits.

I find this interesting and perhaps a plausible explanation for the Wim Hof and g-tummo phenomena, do you?

Sunday I found another dead guy lying on the sidewalk, probably about my age, 52. That's my fourth in 13 years of whatever. I don't know, the community I'm living in is trying to tell me something I think. But all I'm trying to do is buy some textbooks; it's not my fault that the textbook I need is $130! I simply do not understand why the Academy would teach physics in any other language than Geometric Algebra and Geometric Calculus; I don't get it.

Hope you're doing well in this, the freaking fiasco . . .