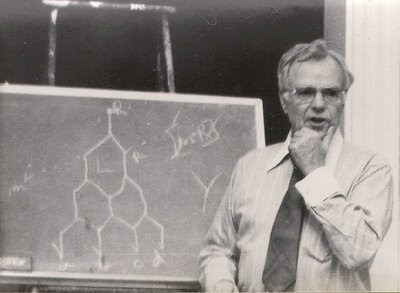 A world in which Jim Links exist would surely make possible new forms of both eroticism and interrogation but I suspect that the Opening Up of Inner Space to Direct Exploration will be the most profound event in human history, changing the human species beyond recognition.
Posted by nick herbert at 5:55 PM

Thank you, dear Nick Herbert, for your friendship to my father, Jim Culbertson. I happenned to stumble across this (although I have visited your website purposefully in the past), and truly loved reading this obituary, the most clever one I've read yet. As always, you do truly understand Dad. It was a joy to open this page and see my Dad's smiling face. I hope life is treating you well.

I did a search for my grandfather and came across your site. It was heart-warming to see his picture. I loved him much and wished I had known him better. Thank you for honoring his life and theories on your site. Sincerely, Dave Miller

@David Culbertson, Yes, I believe they are the same person, and we must share a common ancestor. My grandfather's mother died when he was two. He was the youngest child. I forget how many siblings, but one was named Walter. They lived in Pennsylvania.

Your grandfather was the greatest professor I have ever had. I took courses from him in introduction to philosophy, ethics and logic. We used his text "Mathematics and Logic for Digital Devices," in logic. That book ultimately allowed me to succeed in two years of calculus and differential equations,as well as in several computer science courses. I think of him often and am proud to have been one of his students.

To Richard Glenn: Thank you for your kind words. They mean a lot to me and those who loved him. He spoke of his students often; he loved them. John Madden is probably his most famous student. Of him, he remarked "he was well prepared". I am happy Baba's book helped you. I have yet to read it, but I will. The old house in San Luis Obisbo is up for sale now, and my aunt recently sent me some of his work, several boxes I have yet to go through. I have three degrees in science and engineering, so hopefully I will be able to appreciate what I read. I miss him, and I wish I had not lived 3000 miles away, because I only got to see him a handful of times, mostly in the Summers when school was not in session. Thanks again, for sharing your story.
All the Best,
Dave

Yes this is Jamie Culbertson daughter of James T Culbertson, Aunt of Dave Miller, I have loved reading all of the comments on my dad. He was born in Pennslyvania.I am sending my fathers work to Dave. Love and Peace Jamie Culbertson

hi i was a student of dr culbertson at cal poly
also he was my advisor, helped me with my senior project , special relativity ,
he was a very nice person( 1961-1962)