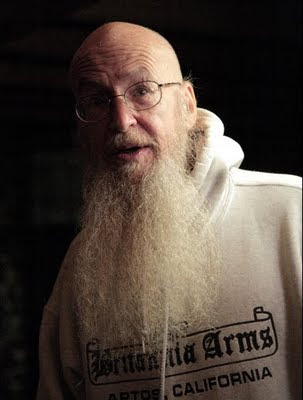 Tuesday I awoke with an intellectual orgasm that lasted all day.

This was nothing new--the exhilarating certainty that I had discovered some brand new way of looking at things in math or physics--but usually by the time I poured my second cup of coffee I could refute the half-formed message from the world of dreams.

But today was different. Despite my best efforts this new insight refused to be dispersed.

So I wrote it all down in the form of an article entitled: Nick's Theorem: A Fundamental Limitation on Local Psychic Powers and mailed it to my friends for comments.

Proving a mathematical theorem is a bit like telling a joke: first you prepare the ground, follow with the buildup, then finally you finish with the punchline. I won't spoil the joke by giving away the punchline and anyway the paper is still being reviewed by my peers--it may yet turn out to be a pipe dream. The abstract reads: "Using Heisenberg's Uncertainty Principle and Einstein's light-speed restriction, I derive a simple and unanticipated limitation on local psychic powers. I believe this proof represents one of the few instances where math and physics have been applied to quantify the powers of the human mind."
Posted by nick herbert at 1:11 AM

i'm pleased to have discovered that you are in the blogsphere & look forward to reading what you publish here, in between your pennywhistle playing. i'm also curious to explore Nic's Theorum - I was only reading your explanation of Bell's Theorum in Quantum Reality this very morning.

may your coffee taste fantastic & wishing you blessings & surprises.

Oh No!
Not another flowing bearded ego whose personal exposition of personal enlightenment he foists on to the 'ignorant' who he assumes to be bereft of his supreme knowings.

The point of Nick's Theorem is NOT that Nick is so smart (He isn't) but that the apparently innocent conjecture that psychics can guess the outcome of quantum-uncertain local processes better than they can guess the outcome of classically-uncertain local processes is not so innocent. The gist of Nick's theorem is that were this conjecture true, then FTL signaling (and effective time travel) would become possible. Local psychic abilities would lead to spectacular non-local powers--a conclusion which is not immediately obvious.

The language of archetype might be close to that of dream, parapsychology or Quantum Reality. This flimsical statement, however is based upon the same absolute nothing from which everything comes. Ex nihilo nihil fit or some such Latin.
I've been promised surgery to affix my head upon a freshly cloned body. Will I be the old head, or the cloned body?:I'm confuzzled

Hello Nic,I read and re-read the fundamental limitations article. I wish to pose a question about the limitations of so called high function neurological beings. Rupert Sheldrake has been conducting studies involving lower functioning animals i.e. dogs and the associated psychic phenomena with dogs "knowing" certain things about their owners thoughts. Sheldrake flew to New York to consider the activities of a parrot who seemed to have clarvoyant predisposition. My question then would be whether Bob or Alice in your thesis might be replaced with "Rover"and "Sparky". That psychic ability might be a neurologically anterior function can be postulated. Consider Buddha and "desire" which is the root of misery. If probability is an outcome which can be fiddled with by Intent- Higher function causes more probability with chaotic human desires and perhaps more interference with outcome probabilities. I suggest you replace Bob and Alice with more reliable creatures. Peace.

Thank you for this article. This is such a great informative article with unique content. This material is interesting and written with style. You are very knowledgeable with the psychic powers and psychic abilities .This blog is best source for thePsychic Readings, I have book marked to see the the next your post for psychic .

The psychics have a special ability to feel the things around them which cannot be felt by an ordinary human being. They can do tell your future and make you familiar with the unseen part of the universe.

As soon as you click on the link below, which is reserved entirely for you, many things will finally change in your life.

This is because you have been chosen to receive your personalized study at no cost. And trust me, you will be surprised by everything you learn.

Follow this link: => Many things will change in your life

With my most warm friendship,

I will forever be indebted to the great Doctor Agbaka for fixing my broken marriage after my husband left me for his mistress for 6 months. I never believed in spells until my friend introduced me to him. At first, I was skeptical about him because I heard a lots about false spell casters but I put my doubts bei desperate to get my husband back and I did according to what he instructed me to do. Now my husband is back just within 48 hours of contacting him. I'm living happily with my husband again after 6 months of divorce and I will not rest till he's known all over the world. He's also specialize in money spells, lottery spells, sickness curing  E.T.C. Get connected with Doctor Agbaka now, his email is Agbakaspelltemple@gmail. com or WhatsApp on +2349052647861

Many Thanks for your emais. دانلود آهنگ جدید