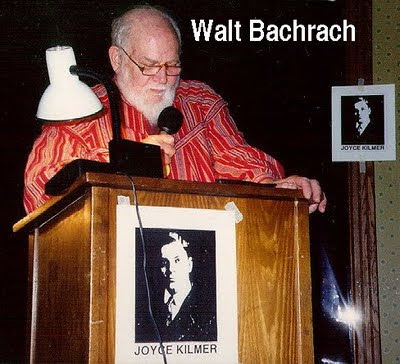 During the Sixties and Seventies, Walt and Rachel Bachrach ran the Encounter bringing a bit of Berkeley-style sophistication to the backwoods. Part convenience store, part bookshop, part art gallery and salon, the Bachrach's Encounter was the social center of Boulder Creek. After the Encounter closed and Rachel died, Walt was set adrift. He continued to play his role as store front Santa Claus at Christmas and as Parade Master for Fourth of July, but he had no project he could really sink his teeth into. Then came the BistroScene and Walt was in his element.

Walt's poetry was loud, bawdy and funny. Walt was like Burl Ives on LSD. Not only was he inspired to create dozens of new poems and stories, Walt actually invented an entirely new poetic genre!--The Abbreviated Aphorism.

The road to Hell is paved.
Time heals.
All roads lead.
A penny saved is a penny.
No news is good.
Money is the root of all.
People who live in glass houses shouldn't.
Let your conscience be.

Walt Bachrach was part of the BistroScene from its very beginning. Which meant that he was on stage for the legendary Joyce Kilmer Cannabis Sativa Challenge on Oct 23, 1994 at the Boulder Creek Brewery--a competition for the best parody of Kilmer's Trees based on "dee wisdom weed". Not only did Walt participate in the JKCSC, he actually won the Gold Medal (as judged by audience acclamation), leaving myself and Jim Rintoul with the Silver and Bronze awards. Here's Walt's entry. What a memorable opening line! At the BC Brewery, I'll bet it's still ringing in the air.

THE JOYCE OF HEMP
I think that I shall never see
a pot head try to fuck a tree.

Beer drinkers--yes, and we know why;
machismo tells them they must try

I'd be glad to be their coach
and teach them how to smoke a roach.

But no; their hungry mouth is prest
against the earth's sweet flowing breast!

Stoned, we sit beneath a tree,
and hope the drunks will let us be.

To raise money for the Boulder Creek Library, people were putting together theme baskets to be auctioned off. Walt Bachrach, inspired by Omar Khayyam, decided his basket would contain "a jug of wine, a book of verse". So each Bistro evening, Walt appealed again and again to the assembled poets to "submit to Walt" original love poems for his basket. Nick judged Walt's appeal fair game for satire:

SUBMIT TO WALT
Spaced-out bards
and word-intoxicated seekers of the Real
we mine our lives
we bare our hearts and heads, we grandly feel.
And we
Submit to Walt.

We worship sacred language
holy speech, enchanted sound
we praise the body
hog the podium, kiss the ground.
And we
Submit to Walt.

We leer, we wink
hike up our skirts, pull down our pants
we guzzle booze
we smoke, we venerate illegal plants.
And we
Submit to Walt.

We worship Kenneth Patchen
Whitman, Rumi, Keats (or is it Kates?)
John Donne, e e cummings
William Blake and Butler Yeats.
And we
Submit to Walt.

We cultivate our darkness
while we celebrate our light
fall half in love with easeful death
and rage against the Night.
And we
Submit to Walt.

Each Earthly thing is holy
Each second, Heaven--or a Hell
Each lady is a Goddess
Could we see beneath Her shell
Each man a living Buddha
And so we might as well
Submit to Walt. 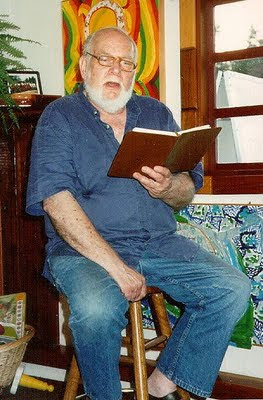 Can i really talk to you about Walt Bachrach? Email me lauracooskey@frontiernet.net I live in Humboldt County and have been trying to find out what happened to Rachel and Walt for years. They were teachers here in 1962! They wrote a book! Please get in touch... the only other sign i find of them on the Internet is the SLV museum site with Rachel's bio... i have been in touch with Linda there, but i want more! Thanks... fun stuff on your site.
~Laura